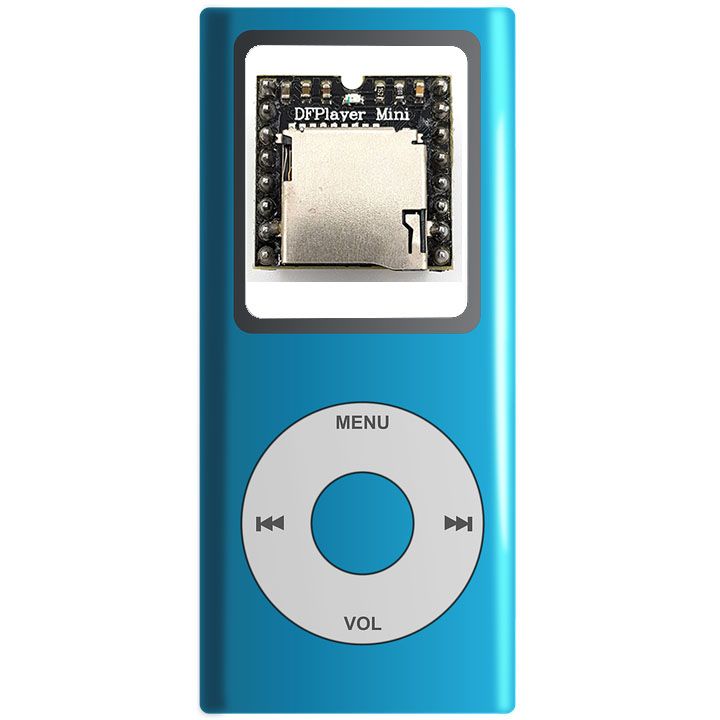 In my last post I had explained how to deal with the YX5300. In this post, I will focus on another MP3 player, the DFPlayer Mini, and how to control it with the Arduino.

Specifications / Features of the DFPlayer Mini

The DFPlayer Mini is available for 5-10 euros from Amazon or other online shops. Very impressive is the small size of the module, because it is hardly larger than the Micro SD card slot. No less impressive I find that there is even space for an amplifier on this device, so that you can connect loudspeakers up to 3 watts directly. A data sheet for the DFPlayer Mini can be found on the internet e.g. here. Here are some basic data:

It should be noted that you have to put a 1 kOhm resistor before the RX input, otherwise you produce a very unsightly, loud hum.

The Adkeyx and IOx connectors are a pretty ingenious thing that allow you to control the DFPlayer Mini largely with buttons. More on that further down.

Folder and file structure of the SD card

The DFPlayer Mini expects the folder and file names in a specific format. The rules for file naming and the maximum number of files per directory depend on the type of directory.

Note: If there are problems with the SD card, check if you have multiple partitions there. Sometimes there is a small boot partition on the SD card that can cause problems. How to fix the problem, I described in my last post.

You can create up to 99 standard folders, which need to be named according to the scheme 01, 02, 03 …. 99. Up to 3000 files fit into each folder, but only the first 255 can be addressed directly via the serial commands. This means that a command like “play file number 627” is not possible in the standard directories. You would need to go there with “next” instructions, which is not very convenient. The file names must have the format 001xxxxx.mp3 (or wav), 002xxxxx.mp3, ….. 255xxxxx.mp3. “xxxxx” is freely selectable and can have more than the 5 digits indicated here. Spaces are also allowed.

The circuit for serial operation

The circuit for operation via the serial interface is relatively simple. Note that a 1 kOhm resistor is put before the RX input of the DFPlayer module.

Note: In my example circuit, I supply the DFPlayer with power from the Arduino. When using larger loudspeakers up to the max. 3 watts the total power consumption of the Arduino should be considered and not exceed 500 mA.

Control via the library
DFRobotDFPlayerMini

The DFPlayer Mini control with Arduino is not difficult, as there are a number of libraries on Github. I use the DFRobotDFPlayerMini library, but that doesn’t mean the others are bad. I just tried it first and stayed with it.

As usual, you install the library by downloading the zip file and unpacking it in the “Arduino-libraries” folder. The included sample sketch “FullFunction.ino” provides a good overview of all functions. I modified it a little so that you can call the commands via the serial monitor. Here is the result:

The only thing that doesn’t work yet, at least, are the queries (“q” commands in the menu). I think I’ve got to go deeper at a later stage. If you find that out, I’d be grateful for a hint.

In my last post I showed how to control the YX5300 MP3 module with your smartphone. This could be transferred to the DFPlayer Mini with relatively little effort.

Does it work without a library?

Controlling the DFPlayer Mini with the Arduino without a library is no witchcraft, as the data sheet is quite easy to understand. This is the structure of the commands:

Each command sequence begins with “7E”. This is followed by VER (version), which is basically “FF”. “Len” is the command length in bytes. This does not count start bytes, end bytes, and checksum. Normally, this means six bytes remain. “CMD” is the actual command and there is a list in the data sheet for this. “Feedback” controls whether you get a response from the module. There is only “01” for feedback and “00” for no feedback. “para1” and “para2” are – not surprisingly – the command parameters. These are also listed in the data sheet. The check sum gives additional security, but you can also omit it. The data sheet explains how to calculate the checksum.

Here’s an example. To play a specific song in a standard folder, the command 0x0F is used. If you want to play song 002 in folder 01 and no feedback is required, the command sequence without checksum is:

The bytes are transmitted individually via Serial.write(xth byte). “Serial” must be replaced by the defined SoftwareSerial. It’s quite hard to implement the commands, so you can be glad that there are libraries. But personally, I always aim to understand what is happening behind the scenes.

There is another option to control the DFPlayer Mini. As mentioned above, many functions can also be used via the Adkeyx and IOx connector pins 9, 11, 12 and 13.

With the ADKEYx connectors, various functions can be controlled by adding additional resistors. I’ve tried it and it works perfectly.

By the way, “Segment X” means “play song No. X”. However, the order of copying the songs is again important, regardless of the type of folder (!).

Now that I have tested both modules, I have to say that both are quite similar in terms of functionality. However, the DFPlayer Mini is much more flexible with its key functions compared to the YX5300 module. It’s an advantage of the DFPlayer Mini that it has pins for the speaker or amplifier connection. Added to this is the small size of the module. The advantage of the YX5300 module, on the other hand, is the jack plug socket, to which headphones or (active) speakers can be connected directly. If you don’t like to tinker, the YX5300 may be better the better choice.