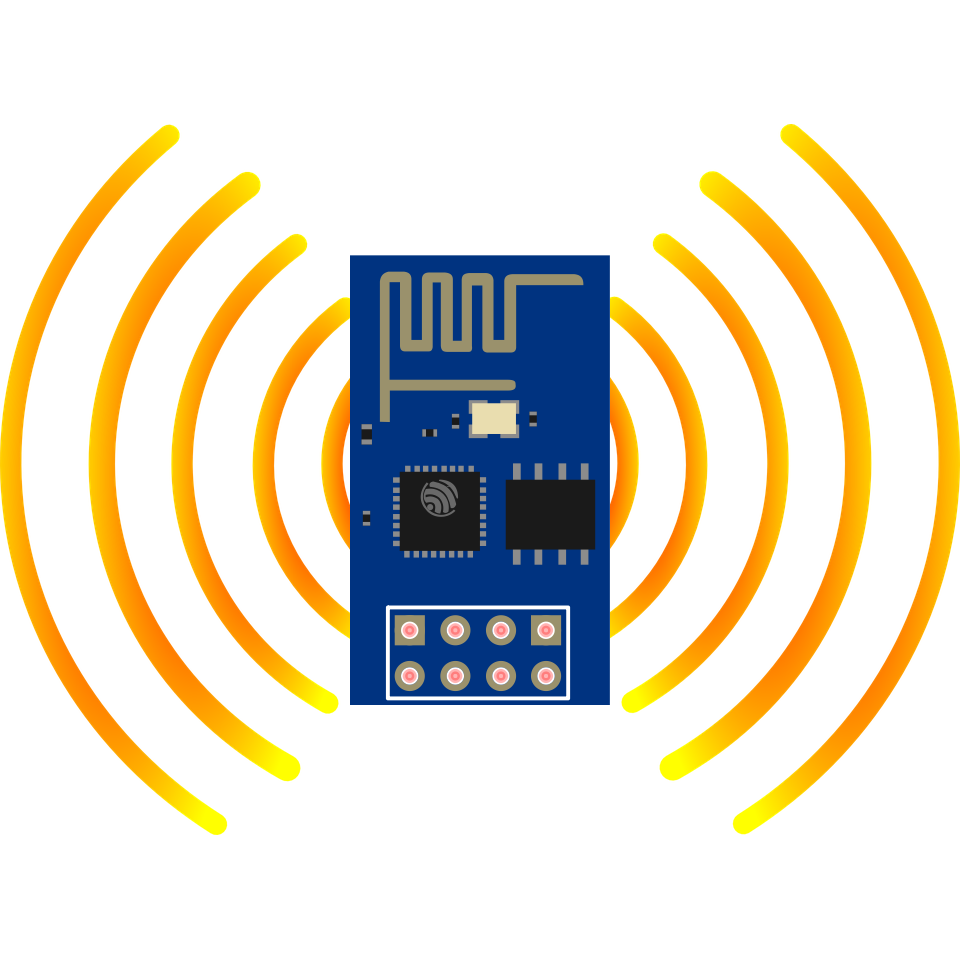 A lot has already been published about the ESP8266 ESP-01 module. So why another post about this topic? Until I was able to do everything I had planned to do with my ESP-01 module, it took a lot of time, despite the wealth of information available, because the required details were spread over many sources. Therefore, here is the attempt to introduce the basic functions step-by-step and not too long but comprehensible. I focus on programming with the Arduino IDE. Im Einzelnen behandele ich die folgenden Themen:

An ESP8266 ESP-01 module or, in short, ESP-01 module is based on the ESP8266 chip from Espressif. This chip is used on various modules, whereby the ESP-01 module is the simplest variant. It is basically a fairly powerful microcontroller with integrated Wi-Fi.

The original firmware allows programming via the somewhat cryptic “AT commands”, which you may know from Bluetooth modules such as the HC-05 and HC-06. I have described these components here. Smart people have made it possible to program the ESP8266 modules with the Arduino platform, which is the main topic of this article. Later, however, I will also briefly mention the AT commands.

Note: Once you have uploaded an Arduino Sketch, the firmware is overwritten and the module no longer understands AT commands. Then you have to flash it again with the original firmware. This is not a big deal, but it requires a few steps. More on that below.

Pinout of the module

The ESP-01 module has 8 pins arranged in such a way that you cannot connect it directly with a breadboard. Because of this and because it is easy to mix up the pins due to the missing label, I recommend buying a small adapter (see photo). You get the module including the adapter e.g. at Amazon for 5 – 10 Euro.

The module is powered via VCC/GND. The voltage should be between 2.5 and 3.6 volts. For serial communication the module uses TX and RX. If you program via an Arduino, strictly speaking, a voltage divider or logic level converter must be set in front of RX, so that the 3.6 volts are not exceeded. The CH-PD is the enable-pin and is connected to the power supply. The RST pin triggers a reset if it is set for short time to “LOW”. GPIO0 and GPIO2 (General Purpose Input Output) are the two programmable I/O pins. GPIO0 is also required to set the ESP8266 ESP-01 module into programming mode. For this purpose, this pin is connected to GND when the power supply is switched on or during a reset. After that, the connection to GND can be disconnected. The module remains in programming mode until a sketch is uploaded.

You can use TX as GPIO1 and RX as GPIO3 and thus you have four I/O Pins. Nevertheless, the ESP8266 ESP-01 module is of course a little limited in its possibilities due to the small number of GPIOs. Those who need more can rely on the larger representatives of the ESP8266 module family, in particular the ESP-12. In a further post I will also show how to make port expansion with GPIO0 and GPIO2.

It takes less than two minutes to extend the Arduino IDE to include the ESP8266 modules. In the first step, you have to enter the appropriate board manager URL. To do this, you need to go to File – > Preferences and click on the icon marked in red:

Then enter the address: “http://arduino.esp8266.com/stable/package_esp8266com_index.json” as a separate line and confirm with “OK”:

The next step is to go to Boards Manager, search for “esp8266” and install the package:

Finally, you have to restart the Arduino IDE and that’s it.

For the circuit, it is important to note:

Choose “Generic ESP8266 Module” in the Arduino IDE as board. In addition to the port, you leave the other settings as they are.

A simple blink sketch is a good test:

If you then connect an LED to GPIO2 it should work. If not, in case you have not already done so, you should disconnect GPIO0 – GND and do a reset.

If you take a USB-to-TTL adapter instead of an Arduino, it is best to choose a model where you can set 3.3 V. Here is an example:

It is important that you connect now RX to TX and TX to RX. A voltage divider for RX is omitted if you can set your adapter to 3.3 volts.

Control of the GPIOs via WiFi

To “warm up”: send a message to the browser

Controlling the ESP8266 by WiFi is quite an extensive topic, which I have covered in a separate article (link). There you can delve deeper into this matter. Perhaps the following examples will whet your appetite.

You only have to adjust the following sketch slightly. At the beginning of the sketch, a server is defined: ESP8266WebServer Server(80);. 80 is the default port, so you can access the website without specifying the port in the browser. In this, as well as the following sketches, you only find the following in the main loop: server.handleClient(); What is actually interesting is defined by server.on("/",handleRoot); in the setup. Translated, this means that when the main web page (“/”) is called, the function “handleRoot” is performed. In this simple sketch, handleRoot only sends text with a little HTML formatting. The “200” is the HTTP status code (200 = OK), see also here.

In this example, an LED attached to GPIO0 is switched via Wi-Fi and browser. The sketch is similar to the one above. Here, however, two subpages have been added, which are called by links (” < a href=…… > ” and that triggers the execution of the corresponding functions (ledan(), ledaus() ). Some German lessons: an = on, aus = off!

If you uncomment the commented lines, you can track the connection on the serial monitor. For me, however, this has led to difficulties in accessing the web pages. So I would only do that for testing purposes.

The switching of two LEDs can also be done with this methodology:

With two GPIOs, of course, you have limited options. This is probably why almost everyone who writes an introduction about the ESP8266 ESP-01 module uses temperature measurement via a DS18B20 sensor as an application example. Because this works with the One Wire technology. Where I2C and SPI need two or three communication lines, One Wire – as the name suggests – can do with a single one.

Since this is a post about the ESP-01 module and not about the DS18B20 sensor, I will not go into the details and refer to the many tutorials available on the net. But at least few words about the sensor: the DS18B20 is available both as a TO-92 (“three-legged”) and as a waterproof version. I use the latter:

The part is supplied with the bare connection cables. I made a breadboard adapter with a piece of PCB prtotyping board.  Black (GND) is connected to GND, red (VCC) to 3.3 volts (5 volts also goes) and yellow (DATA) to GPIO0 or GPIO2, depending on the programming. It should also be noted that the data line requires a pullup resistor of 4.7 kOhm.

I do not go into the DS18B20 related part in more detail. At this point, simply take as a given fact that the getTemp() function returns the temperature as a float. If you compare the code with other sketches for the DS18B20, it might seem a little more complicated here. You can simplify it theoretically by including the “DallasTemperature” library, but then I had problems with the web page connection – for whatever reason.

The rest should be relatively clear. The temperature is measured every five seconds. To update the website regularly, the HTML code <head><meta http-equiv=\"refresh\" content=\"10\"></head> was inserted. The “10” means that a refresh is performed every 10 seconds.

And another note: quotation marks need an additional backslash so that they are not interpreted as Arduino code.

As mentioned above, uploading the Arduino sketches will overwrite the original firmware, so that control via AT commands is no longer possible. However, you can restore the AT software or choose a newer version. This is a little laborious, because you have to install a small tool. A good instruction can be found here. If you stick to it (exactly!), it works.

Control via AT commands

This will not be a detailed introduction to the AT commands. I would just like to use two examples to give an impression of how AT commands work. A list of AT commands can be found here.

Note: Not all AT commands work with every firmware version.

The circuit for transmitting the AT commands to the ESP8266 ESP-01 module is fundamentally different from the circuit for uploading sketches and firmware. RX is hooked up to TX (via SoftwareSerial), TX to RX. A voltage divider is applied between the Arduino TX and the RX of the ESP-01. GPIO0 is not connected to GND because you don’t go into programming mode. Of course, the transmission of the AT commands is also a kind of programming, but it’s not a whole program that is transferred. In addition, the reset pin remains unconnected.

To enable communication, a SoftwareSerial is set up. When uploading, you now have to choose the Arduino as the board.

Setting up a server with AT commands

After the softwareSerial Sketch has been uploaded, you open the serial monitor, set the baud rate to 9600 and select the option “Both NL and CR”. Sending “AT” should be answered by the module with “OK”. If it doesn’t, you’ll have to check all settings and flash the module again with the firmware if necessary (see above).

If everything works, “AT+GMR”   will provide the version of the firmware. To display a message in your browser, enter the following AT commands:

AT+CWJAP=“eure SSID“,“WiFi-Zugangspasswort“  — > connect to Wi-Fi; enter this including quotation marks

AT+CIFSR — > here you can see your IP address

At this point you can start your browser and enter the IP address. As you see, you don’t see anything yet.

AT+CIPSEND=0,5  — > channel and number of characters

A ” > ” appears. You enter “Hello” without quotation marks, then press enter

AT+CIPCLOSE=0  — > Only now a friendly “Hello” appears in the browser.

Controlling GPIOs with AT commands

First of all: controlling the GPIOs did not work with my ESP8266 ESP-01 modules until I updated the firmware according to the instructions above.

In addition to programming with Arduino and AT commands, there is a third variant, namely programming with the rather simple programming language LUA. To do this, you must first flash your module with the nodeMCU firmware. The procedure is described very well here. I’m not going into it.

If you want to get even deeper, you can try the Manufacturer’s Getting Started Guide. A very good site that explains the basics well is this one. I also recommend browsing the various example sketches you will find after installing the ESP8266 board family in the Arduino IDE.

At a later stage, I will make a post about the big brother of the ESP-01, the ESP-12. I also have in mind to do introduce ways to expand the ESP-01 port. Stay tuned!