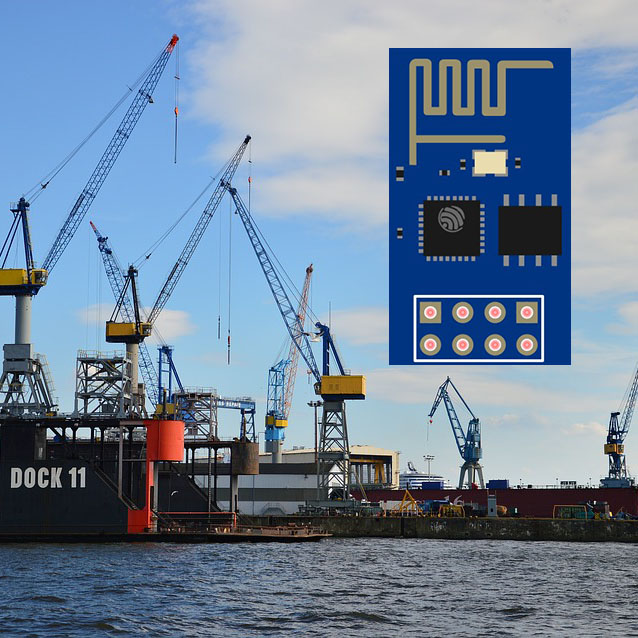 In my last post I explained the basics of the ESP-01 module. You will often read that this module has two GPIOs. But there are four, because you can also address TX and RX as GPIO1 and GPIO3 respectively. Nevertheless, this can become scarce for many projects. If this is the case, then it is certainly the easiest way to switch to the big brother, the ESP-12. Alternatively, e.g. if this would not be enough, one can switch to the numerous options for ESP-01 port expansion. I would like to present three of them in this post:

The first two are addressed via I2C and therefore require two GPIOs. Three GPIOs are required for the shift register.

In a separate post I will show how to “abuse” a Counter IC for port expansion.

The MCP23017 is by far the most versatile of the three components. For the “normal” breadboard user, the MCP23017-E/SP version is recommended. You can get this nice IC with its 28 legs at Conrad, Reichelt and Co for about one euro.

The MCP23017 has two ports (A and B) with eight programmable in-/outputs each. It also offers extensive interrupt programming options, which I will not discuss in detail in this post. I will only make up for this in a separate post about this interesting piece of electronics.

In addition to the 16 I/O pins, the Pins SDA and SCL for the I2C communication and the pins for the power supply, the MCP23017 has the following in- and outputs:

The circuit for control by the ESP-01

As a simple application example for the ESP-01 port extension, let’s control sixteen LEDs. In order not to make the schema too confusing, I have drawn only a small part of the lines to the LEDs. I also did not include the power supply of 3.3 volts in the circuit. I explained the upload of sketches to the ESP-01 module in my last post and therefore do not go into that detail anymore. The main aspects of the circuit are the following:

Note: You might be tempted to power the ESP-01 module and the MCP23017 separately, especially if you are hook components to the MCP23107 that require 5 volts. The problem is that a HIGH signal to SDA/SCL must be at least at a level of 80 percent of VDD. I also fell into that trap. The error was hard to find because it didn’t fail completely, but only worked unreliable. If you want to work with different voltages, you have to put a level converter into the two communication lines.

The MCP23017 has a lot of registers that make it very flexible, but this also makes programming a little complex. That’s why I developed a library that you can download here from Github. As already mentioned, I will publish a post about the MCP23017 at a later stage and there I will explain the library in detail. Here I limit myself to switching on and off I/O pins.

The following example sketch first creates an MCP23017 object. We don’t use the functionality of the reset. With Wire.begin(0,2);, GPIO0 and GPIO2 are defined as SDA or SCL. myMCP.Init(); defines some register contents. The function myMCP.setPinMode(); determines whether the pins act as input or output, similar to the Arduino pinMode function. With myMCP.setPort();, the HIGH/LOW states are set for an entire port. myMCP.setPin(); switches individual pins. myMCP.togglePin(); switches from HIGH to LOW or vice versa.

Like the MCP23017, the PCF8574 is an I/O expander with interrupt output to be controlled via I2C. However, it has only eight in-/outputs, a single interrupt output, and does not have the many options of the MCP23017. On the other hand it is very easy to control, even without a special library or a long study of registers.

The PCF8574 is available in various versions, e.g. the DIP16 variants PCF8574P, PCF8574N or PCF8574AN. These have the same pinout differ according to my research essentially in the I2C addresses. I used the “N” variant for this post.

A peculiarity of the PCF8574 is that the pins only provide a few hundred microamperes when in HIGH state. If you want to control LEDs, for example, you have to use the pins as input (current sink LOW). This will become clearer later in the circuit and the sketch.

Circuit for the control by the ESP-01

Again, I take a simple example of controlling some LEDs as an example for the ESP-01 port expansion. The fundamental difference to the MCP23017 is the current direction: it flows from the LEDs into the PCF8574 to GND. Moreover, please note:

It is important to pass the pins for SDA and SCL when using the ESP-01 at Wire.begin().

Even if there is no Read in the sketch, I have integrated a read function for completeness, which queries the state of the pins. Try it out by yourselves.

The shift register differs from the other two components for the ESP-01 port expansion essentially by:

A detailed explanation of how a sliding register works would go beyond the scope of this article. I found a very good presentation here. My rough explanation: the name of the component derives from its functioning, namely that the data to be transferred is pushed bit by bit into the shift register. Each incoming bit shifts the existing one by one place (like a gun magazine that is filled with bullets – sorry for this martial comparison). From the shift register, the complete data byte is then transferred “in one go”, i.e. in parallel, to the storage register (output register).

The pins have the following functions:

Circuit for the control by the ESP-01

Again, I take the simple example of an LED control. But I would also like to show you how to use two 74HC595. The main points are:

I have chosen “LSBFIRST” as parameter for the “shiftOut” command, i.e. the bitwise transmission starts with the lowest bit (LSB = least significant bit). The alternative is “MSBFIRST” (MSB = most significant bit). You can play with it if the arrangement of the LEDs should not be in the order as you want it to be. If the storage pin attached to STCP goes from LOW to HIGH, the data is transferred from the shift register to the storage register and the LEDs are switched accordingly.

This was a small overview of the most common methods of ESP-01 port expansion. In a coming post, I will go into more detail about the MCP23017 with its many functions. And in another post on Counter ICs, I’ll come back to the port expansion again.