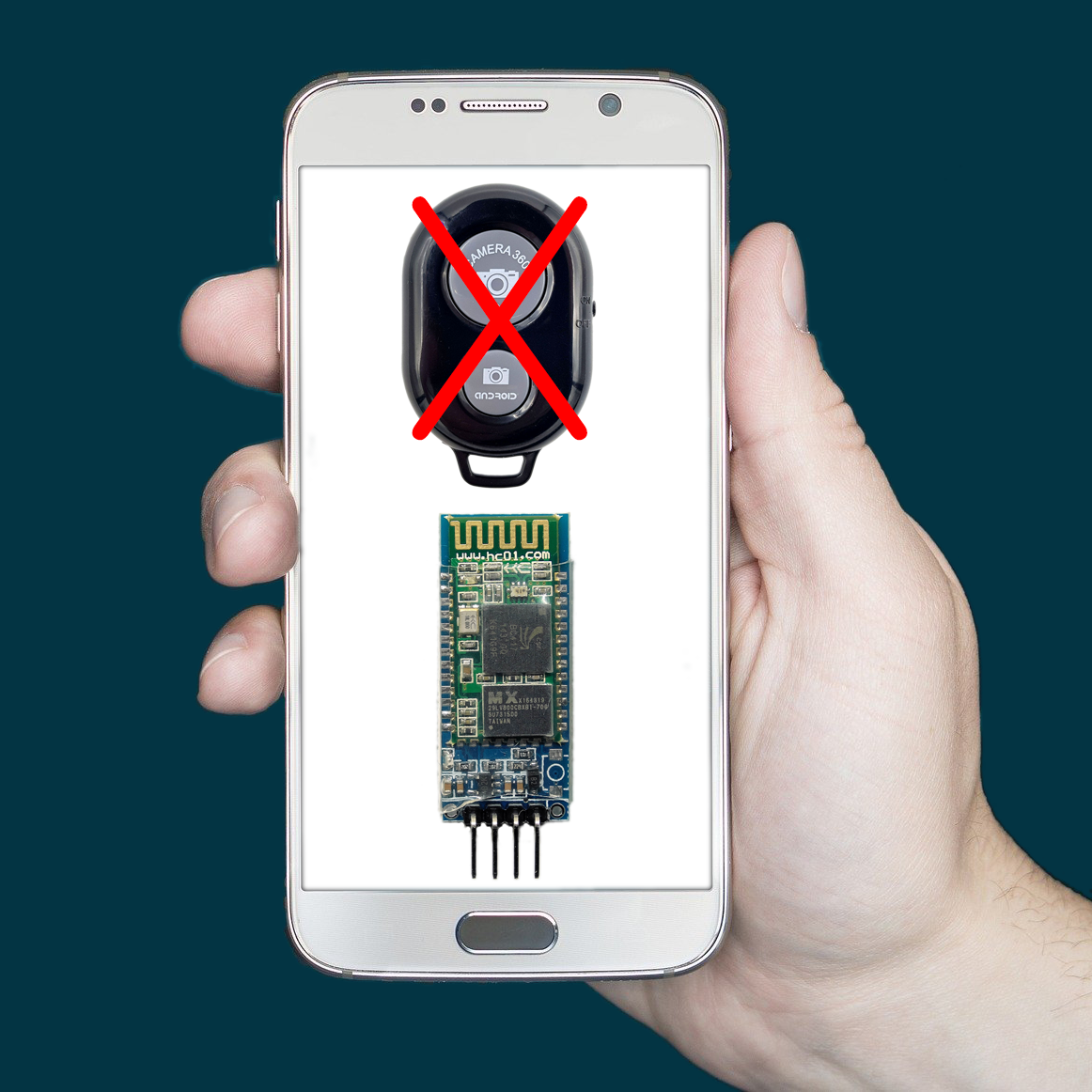 In the last post I described how you “hack” a remote shutter for your smartphone to control it with a microcontroller or an Arduino. However, simulating commercially available remote shutters with Bluetooth modules was not as easy as one might think.

In this article I want to show how you can still use Bluetooth modules (HC-05 or HC-06) as remote triggers. To do this, I’ll show two ways, both of which go through MIT App Inventor.

As an interface between the Bluetooth (BT) modules and your smartphone, the development platform MIT App Inventor (later called “App Inventor”) is suitable. I have already introduced it in my article Controlling Arduino boards with your smartphone. This platform allows Android smartphone apps to be created graphically from blocks. Maybe you know Scratch? App Inventor works similarly. An introduction to App Inventor would require an entire post. From my experience I can say that after one or two afternoons you master the basics.

So I can only briefly outline how it works. If you are interested, I can also create a detailed introduction as a separate post (your feedback is welcome).

But don’t worry. You don’t necessarily have to learn how to use App Inventor to try out the examples in this post. I also provide the finished apps. You just can’t customize them if you don’t want to deal with App Inventor.

I have to start with a restriction

Using App Inventor, you can get your smartphone to start the smartphone camera app, but you still have to press the shutter button. This is not good news for the construction of a remote shutter, of course.

But I have found two ways to solve the problem. Luckily, there are smart people who develop so-called extensions for App Inventor. With the Camera Extension of Pura Vida Apps, direct access to the camera trigger works. This extension costs 12 USD (software developers also have to live on something!). But you can download the app I created with it for free (courtesy of Pura Vida Apps).

The second way is through the Tasker app. This allows you to create an app in 5 minutes that simply triggers a photo. And this app, in turn, can be accessed by an app created with App Inventor (without an extension). Tasker costs €3.59 (as of November 2020) – but hey, that’s just a beer in the pub. I can provide the app written with App Inventor (apk file), but for technical reasons I cannot provide the app created with Tasker (missing apk file export). But at least you don’t have to get into App Inventor if you don’t want to.

Remote shutter based on Camera Extension

Creating the app with App Inventor

The Camera Extension comes with an example app called Camera. I took this as a basis and added a Bluetooth interface to trigger photos remotely. I called the result “camera_remote”. I can’t publish the blocks of the entire app, but here’s my added part that also gives you an idea of how App Inventor works.

During development with App Inventor, you can test your app on your smartphone. At the end, App Inventor provides an “.apk” file that you can use to install the app, independent of the development environment.

You can download the installation file “camera_remote.apk” from here on your smartphone. The installation should start automatically. However, your smartphone probably complains that the file is not from Google Play. If you trust me 😉 , then you install it anyway. The first time you open it, you’ll need to grant permissions to the app. Then there’s probably an error message – just restart the app, and then it works permanently.

I have successfully tested the app on my Samsung Galaxy Note 8 and on my wife’s Huawei nova (CAN_L11). Of course, I cannot guarantee that it will work on every Android smartphone.

The remote shutter on the Arduino side

On the Arduino side (or whichever board or microcontroller you prefer), take an HC-05 or HC-06 BT module and upload the SoftwareSerial sketch from the examples for testing. I have described the BT modules and how you set them up in detail here.

You may still need to adjust the SoftwareSerial Sketch in terms of baud rate. It depends on which BT modules you use and how you set them up.

Once you have paired the Bluetooth module of your choice with your smartphone, you can connect it via the Camera Remote app by tapping “Connect BT Module” and selecting the module. Then it should change to “BT Module Connected” and the color should change from red to green.

If you go to “Show settings”, then you can change some settings of your camera. With “Take Picture” you take a sample photo that is stored as “dummy.jpg” in your “camera/DCIM” folder. It appears reduced in size on the display.

And now comes the real highlight: enter an image name into the serial monitor on the computer and send it. The smartphone now takes a picture and saves it under this name. You can find it in the DCIM directory (but not necessarily in the gallery).

And then you can play. Simply set any condition under which a photo will be taken. E.g. attach a motion sensor and take a photo when motion is detected. All you have to do is call mySerial.print("irgendein Name"); for it.

The following sketch causes a photo to be taken every 15 minutes. The file name for the photo is simply the system time in seconds, i.e. millis()/1000.

How to keep the display active

There is still one problem, namely when the smartphone is to remain photo-ready for a long time without interaction. At some point the screen gets dark and a little later the app doesn’t work anymore. Here are two solutions:

Remote shutter based on the Tasker app

With Tasker, you first create an app that does nothing but take a photo when you launch it. So it is only a tool. In the appendix you will find a detailed step-by-step guide for creating the Tasker app. Here is the path in broad strokes:

If you don’t want to engage with App Inventor and therefore use my pre-built apk file (which we’ll get to right away) created with App Inventor, you’ll need to use the default name for the package (“com.wolles.take_photo”) when exporting the app created with Tasker. The detailed instructions will make this clear to you.

Creating the app with App Inventor

Now we come to the creation of the main app, which calls the Take_photo app via Bluetooth. I named it – not very creatively – camera_remote_2. This app is completely my work. Therefore, I can offer you to download the “.aia” file here. Select this option if you want to do a little work with App Inventor, for example, to customize the app. You can import the .aia file into App Inventor and then have access to the design elements and blocks.

If you just want to download the result as a ready-to-install “.apk” file, then you can do so here.

Explaining the development of the app in detail would be beyond the scope. But here’s at least a screenshot of the designer and blocks screen in App Inventor:

A key difference from the first way through the Camera Extension is that the Arduino does not pass a file name. This is done by the Tasker app. Any transmission of any string will trigger the photo.

The remote shutter on the Arduino side

On the Arduino side you just have to connect a HC-05 or HC-06 BT module and address it via SoftwareSerial.

The following sketch triggers a photo every 15 minutes.

Remote shutter based on Tasker – the result

Now you can remotely trigger photos from the Arduino. The photos can be found in a separate folder. However, they should also be displayed in the gallery if you have ticked the corresponding box when creating the Tasker app (see step-by-step instructions).

Here is the detailed guide to creating the Take_photo app. Tasker may need to get used to it at the beginning, but with this photo series you should get it done within a few minutes.

I thank Pura Vida Apps for allowing everyone to download the apk file based on the Camera Extension.