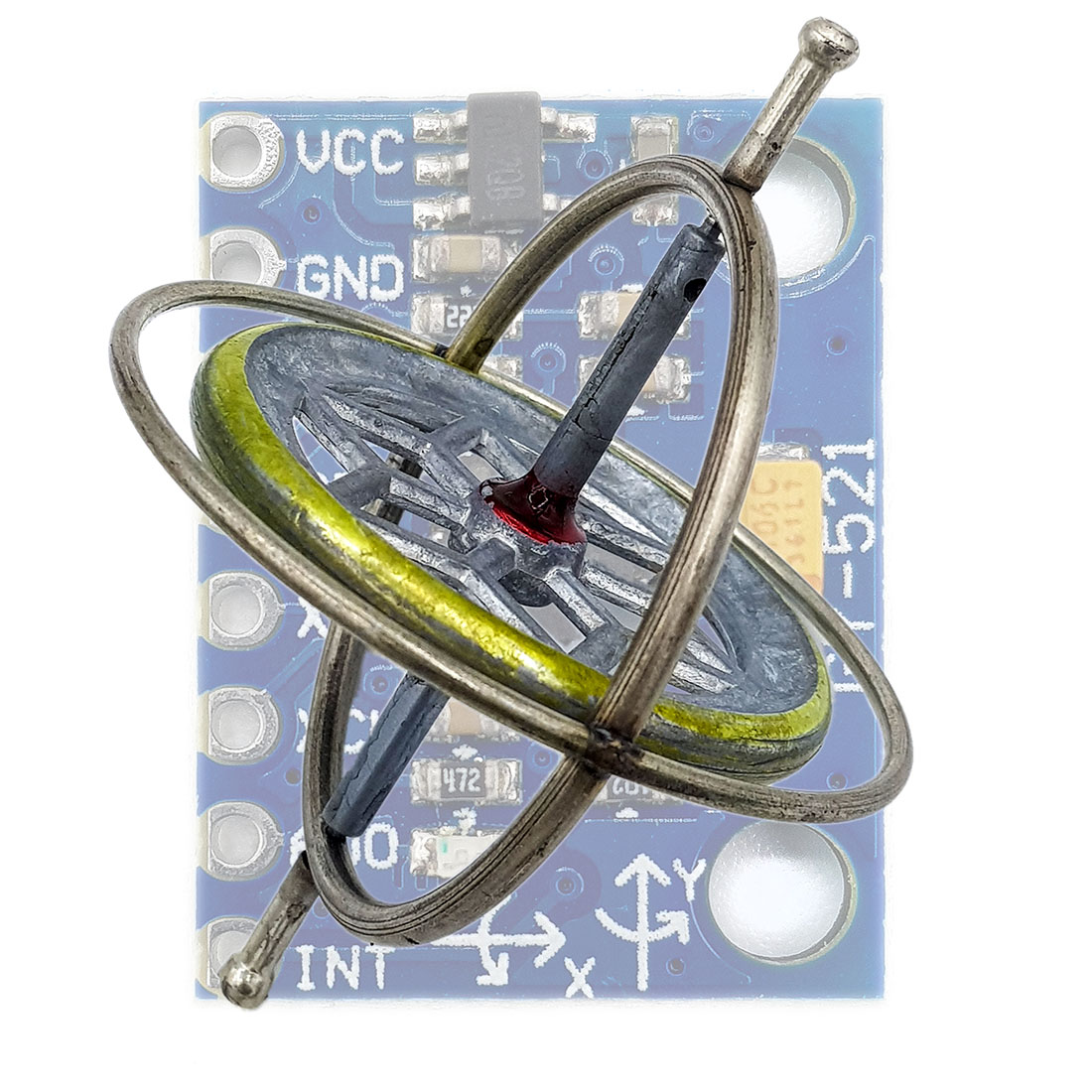 The MPU6050, or more precisely the module based on it, is a 3-axis accelerometer and 3-axis gyroscope. In addition, the MPU6050 measures the temperature. A lot has already been written about this sensor, but maybe I can give you one or the other new aspect with this post, like the interrupt programming.

If you just want to get started quickly, you can go directly to the libraries.

The measuring principle of the MPU6050

In the context of accelerometers, you often come across the terms “3-axis”, “6-axis” or even “9-axis sensors”. Don’t worry, we are not leaving the three-dimensional world. Instead, one or more sensors, which are effective in three dimensions, are used in parallel. And in the case of the MPU6050, this is an accelerometer and a gyroscope. 9-axis sensors usually have an additional geomagnetic field sensor.

The classical gyroscope works like a toy whipping top. Everyone knows it from childhood and also its effect. The rotation stabilizes it (precession) and therefore the attempt to tilt its axis of rotation requires force. And exactly with this you can determine the inclination or angular acceleration of an object (e.g. an airplane or ship). Compared to the simple whipping tops, the gyroscope is mounted in a frame. An exemplary toy gyroscope:

In the MPU6050 there is of course no part which is spinning (and fortunately, you don’t have to move it manually ;-)). Such sensors are based on Micro-Electric-Mechanical Systems (MEMS). In the case of gyroscopes, these are moving parts that change their position within a fixed frame when accelerated. The distance change results in a change in capacity. In principle, this is how it looks:

An older technique is based on the piezo effect, so it uses pressure changes as the measuring principle.

The modules have printed the position of the x- and y-axis. The z-axis is the perpendicular on the module.

The most important technical data of the MPU6050 are:

For more information, see the data sheet and the register map.

Control of the MPU6050 without library

I’m not going to go through all the details of the sketch, just so much:

Below you can see the output of the sketch on the serial monitor. Since the MPU6050 was placed flat in the x/y plane, all results except acceleration in the z-direction (acceleration due to gravity) should be zero. This is not the case, but the result is not bad in first approximation.

You can adjust the initial values by entering offset values in corresponding registers. Some libraries have implemented this option, others have not.

For completeness, I have shown the circuit here. We will need the LED and the line to the interrupt later. Pull-ups for the I2C lines (3.3 V) are integrated on the module.

I then added a few extras to the Minimalsketch:

Through intermittent sleep I could reduce the power consumption from 5.2 to 1.4 mA with the following sketch. If you then remove the LED, the consumption drops to less than 0.1 mA.

If you want to understand the sketch in terms of register settings, take a look at the register map.

Since I have chosen the range +/- 16 g in the example, the measured values for the acceleration in z-direction decrease to one eighth:

I could have added more features, but at some point it gets confusing and then libraries are the better choice.

For the conversion of the raw values to values in g, the following applies:

The conversion of the gyroscope data into angular velocities is done according to the following formula (derived from the data sheet):

Perhaps the following very short video of the “Magic Push Button” will whet your appetite for the interrupt function, which by the way was not implemented in any library I looked at.

As you can see, a press on the button makes the LED glow – even though the button is not connected at all. The solution to the puzzle is that the vibration when the pushbutton is pressed is sufficient to trigger a correspondingly sensitive “wake on motion” interrupt. So, I could just as easily have knocked on the table. The Arduino sketch ensures that when the interrupt is registered, the LED lights up for one second.

You can also do other great things with this interrupt. For example, you can build a device that turns itself on when you pick it up. If it’s lying around, it should be sleeping. No problem, you only have to use the interrupt signal as a wake-up signal for the microcontroller. See also my article about Sleep Modes.

The problem with undocumented registers

Interestingly, there are hardworking people who have done the documentation work for the registers in a reverse engineering process. The result, i.e. the complete register map, can be found here.

I took the instructions and wrote the following sketch based on it. Some steps suggested in the manual are not necessary in my opinion. I inserted but commented them.

Explaining the sketch in detail would be beyond the scope. Just a few comments:

Libraries for the MPU6050

No library I have found really takes full advantage of the features of the MPU6050. The interrupts are just an example. I would like to create a more complete library. However, the effort is considerable and most of you are likely to get along with the basic features. Maybe I will come back to that.

The most complete library I have found is that of Adafruit. You can download it directly from GitHub here or install it via the library manager in the Arduino IDE.

The best way to start is with the included sample basic_readings.ino. It reads the acceleration, temperature and gyroscope values. You can set the measuring ranges and a low-pass filter (setFilterBandwith()) for the sensors. I will come to the filter below. Here’s the unchanged sketch:

If you want to convert angular velocities to degrees/s:

For the conversion of the acceleration values to g, divide the values by 9.81.

Especially with angular velocities, you may not only want to determine individual values, but also track the progression. The sketch plotter.ino is suitable for this purpose, which I also print here unchanged:

Upload the sketch and then select the serial plotter instead of the serial monitor. Here I turned the MPU6050 several times by 90°. The gyroscope peaks are the small pink and orange peaks between the bigger accelerometer peaks:

I would like to mention two parameters whose effect is illustrated by the following sketch. This sketch is from me, so it’s not part of the library’s sample sketch.

The function setCycleRate(frequency) causes the MPU6050 to go to sleep and wake up at the specified frequency to record a set of readings. This saves considerable power. Strictly speaking, the function only sets the frequency. It is activated with enableCycle(true).   If you pass “false”, it becomes inactive.

The function setFilterBandwith(bandwith) dampens the fluctuation of the measured value. If you upload the sketch with the parameters I have selected (see line 58/84) and tilt your MPU6050, you will see that the readings are very sluggish. If you use the cycle function, you should set the bandwidth high. For example, change the value to 260 Hz and see what happens.

More information can be found in this Adafruit tutorial on the MPU6050. There are also a number of other example sketches.

Very interesting is also the library MPU6050_light, which you can find here on GitHub or install via the Arduino IDE. It is kept simple (just “light”, as the name suggests). But it offers the possibility to output tilts, which it calculates from the (earth) acceleration data. A prerequisite for reliable data is that the movements are slow, so that the acceleration due to gravity is the decisive variable. Here is an exemplary output of the sample sketch getAngle.ino. I flipped the xy plane back and forth. This works quite well, but I wouldn’t dispose of my spirit level.

6 thoughts on “MPU6050 Accelerometer and Gyroscope”