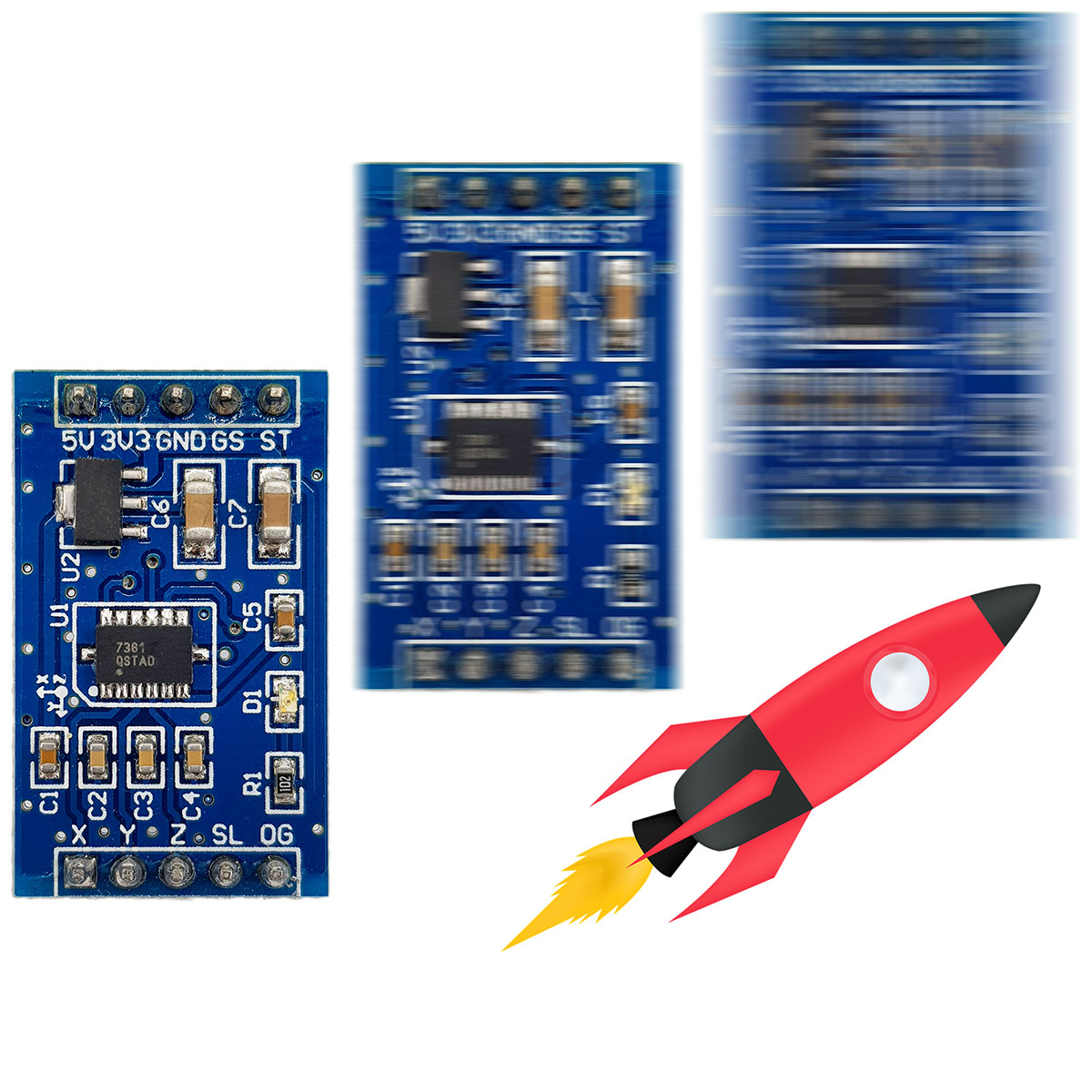 After introducing the MPU6050 6-axis I2C sensor in the last article, I would like to deal with the simpler MMA7361 3-axis analog acceleration sensor in this post. I will cover the following topics:

Specifications / Properties of the MMA7361

I explained the working principle of accelerometers in my last post.

The MMA7361 is a pure accelerometer. The measurement data for acceleration in the x, y and z directions are provided as analog values at the pins X, Y and Z. You will find printed on the module where the x, y and z axes are located.

The MMA7361 module used in this article is operated at 3.3 or 5 volts in contrast to the bare MMA7361 IC. The measuring range can be set to +/-1.5 g (g = gravitational acceleration, not grams!) or +/-6 g. In addition, the MMA7361 has a self-test function and a 0g interrupt (free fall detection). The conversion of the raw data must be done by suitable sketches. For example, a data sheet can be found here.

Here are the most important data at a glance:

Reading out the raw data of the MMA7361

The raw data can be easily read out via the analog inputs of your Arduino – or whatever microcontroller you use. According to my experience the A/D converter of the Arduino UNO fluctuates strongly with +/- 2 or 3 units. I’ll make up for that in the sketch by averaging 50 values. Alternatively, you might think about using an A/D converter like the ADS1115.

A real nuisance are the dimensions of the module and the fact that the pin headers are already soldered to the module. You can plug the module in a breadboard, but then there is only room for jumper cables on one side. I removed a pinboard and soldered it to the top:

The circuit is not a big surprise:

The sketch for reading the raw data

There is not much to say about the sketch either. Except perhaps that I decided to work primarily with integer variables. The fluctuations of the measured values are so high that float values would suggest an accuracy that is simply not given.

For the above values, the MMA7361 was positioned flat on the table, i.e. with its x/y plane. 0 g should act on the x and y axes and 1 g on the z axis. So, one would expect the same readings for x and y. But that is not the case. I tested several modules and the values were usually between 350 and 380 units, i.e. about 1.7 to 1.9 volts. However, the starting value for a given module and a given axis was quite reproducible.

I could confirm the stated sensitivity of 800  mV/g for the range of +/- 1.5g. Converted to “analogRead units” the following applies:

That means, when I rotated the MMA7361 by 90°, the measured value of the affected axis went up or down by about 163 units. This value is used as aconstant (unitsPerG) in the sketch.

Calculation of acceleration and angle

Zero points of the MMA7361 axes

Before we calculate accelerations and angles, we must first determine the zero points (called “start values” in the further course). In principle, there are two options:

I chose method 2. In my sketches, the zero points are recalculated with each reset.

Calculating the acceleration a from the zero startVal, the rawVal reading and the slope unitsPerG is simple:

If the MMA7361 is not moved, a statement about its position in the three-dimensional space can be made by the distribution of the gravitational acceleration  on the axes. The following diagram illustrates this with the example of the x-axis:

geff is the effective gravitational accelaration force acting on the axis. The following applies to the tilt angle α:

However, there are two limitations:

Regarding the second limitation, here is an example calculation:

So, a measurement fluctuation has a rather drastic effect around 90°. However, for tilt angles up to ~60°, the method is quite exact.

Here is the sketch that calculates the accelerations and angles from the raw data. A few comments:

You can see how I turned the MMA7361 by 90° between the second and third measuring blocks.

The pin 0G is low in normal condition. If “0 g” is measured simultaneously on all axes (according to the data sheet -0.4 g to + 0.4 g), the pin 0G goes to HIGH. The 0 g state occurs in free fall, but possibly also in vibration.

Here’s how you could use the signal:

The free fall interrupt is relatively sensitive. It can already be triggered when you tap on the table on which the MMA7361 is placed. To prevent it from triggering even with a short vibration, you can use a small trick.

First, you change the interrupt condition from RISING to HIGH. If an interrupt is triggered, then after a short time (I have chosen 100 ms in the example sketch) it is checked for another short time (e.g. 50 ms) whether the 0G pin is still active.

Just play around with the delay times to customize the interrupt function to your needs.

The MMA7361 as orientation sensor

In the last section, I want to show you how to use the MMA7361 as an orientation sensor. By this I mean the determination of the 6 main directions in three-dimensional space, which I refer to as follows (view from the side):

In principle, it is simple. First, the angles are determined. The axes with an angle (absolute value) less than 45° are considered to be horizontal, the axis with an angle (absolute value) greater than or equal to 45° as vertical. Depending on whether the vertical axis has a positive or negative angle, it points up or down. And the following sketch simply checks this systematically. I did not consider the special case that two axes have exactly 45°.

The rocket in the post image was taken by   Satheesh Sankaran on Pixabay.