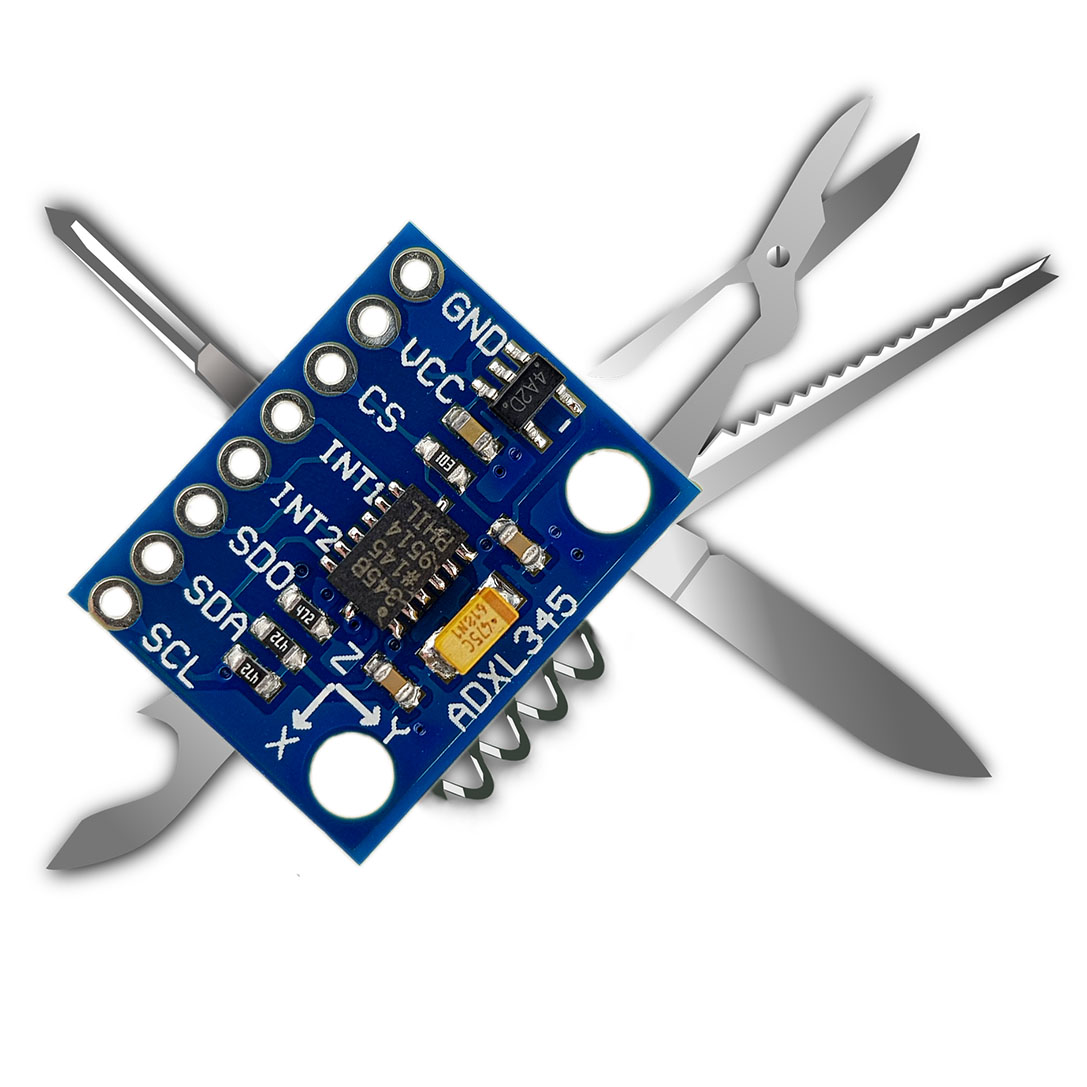 In my last two posts I had reported on the 6-axis sensor MPU6050 and the rather simple accelerometer MMA7361 with analog output. In this post I will cover the 3-axis, digital ADXL345 accelerometer. With its many features, it is for me the Swiss army knife among the accelerometers.

I found a lot of libraries for the ADXL345. But I felt they were all either not complete or written in such a way that you still have to go deep into the data sheet to use them. This motivated me to write a library myself, which – at least from my point of view – is convenient to use. To make it easy for you to use the more complex features such as FIFO, I have added 15 (!) example sketches to the library. Because of this large size, I had to divide the post in two parts (Link to part 2).

Update 30th Oct, 2021: SPI is now also implemented. An example sketch and the Fritzing circuit is attached to the library.

Features / Technical specifications of the ADXL345

I had already described the operating principle of accelerometers in detail in my post about the MPU6050.

As with other sensors, I did not use the bare ADXL345 IC for simplicity, but a module. These usually have:

The disadvantage of the module compared to the IC is that the power consumption is slightly higher. In the normal operating mode at measuring frequencies below 10 Hz, the consumption of the actual IC should be at 30 µA. I measured 100 µA at 5 V supply voltage, and at 3.3 V it was 50 µA.

The most important data at a glance

The best way to explain the features of the ADXL345 is to go through the example sketches.

Wiring the ADXL345 with the Arduino

The wiring shown above was used for all example sketches.

The underlying ADXL345 IC only tolerates 2.0 – 3.6 volts. This is true for the power supply as well as the data pins. Many modules only regulate the supply voltage down, but do not care about the data pins. Adafruit’s modules are one of the positive exceptions (see here). Add a level converter if needed. Normally, 3.3-volt components don’t break that quickly even with 5 volts on the data lines, but it can limit the life of the device.

Operation with the library ADXL345_WE

You can download the library ADXL345_WE here from Github. For installation, unzip the ZIP file in the Arduino Library folder. Alternatively, you can install it via the Arduino IDE Library Manager.

As mentioned at the beginning, I tried to make the library user-friendly. Nevertheless, it has become very extensive. This is simply due to the many features of the ADXL345.

I will now guide you through the library using the example sketches. The sketches can be grouped according to the following themes:

I have added lots of comments in all sketches and inserted parameter lists for the functions. But since this can also distract from the essentials, I only print the first sketch completely here. For the others, I took out many comments. If you want to try out the sketches or build on them, take the detailed versions you download with the library.

The post is quite long. Impatient people can also simply try the sample sketches and return here if something should be unclear.

Basic functions of the ADXL345

The ADXL345 stores the acceleration values as raw data, which are provided in the data registers for the x, y and z axes. You get the latest values there. The maximum “age” of these depends on the measurement frequency (data rate). A high frequency leads to increased noise and power consumption. So don’t overdo it unnecessarily.

The raw values are converted by library functions into acceleration values in g. As a first approximation, the conversion factor in full resolution is 3.9 mg (= milli-g, not milligrams!) per LSB (= Least Significant Bit). In other words:

For result data, such as raw data, g-values or angles, I have defined the structure (struct) xyzFloat. An xyzFloat consists of three float variables. The raw data “raw” includes for example the axis values raw.x, raw.y and raw.z.

Let’s get started. In the first example sketch, you will get to know the following functions:

As an alternative to the “get as string” functions, you can also use the following functions:

But then you will only get numerical values returned, which you have to “translate”. Refer to the library file ADXL345_WE.h for the details of the corresponding enum definitions.

For the following output, I tried to position the ADXL345 flat. The raw- and g-values for the x- and y-axes should therefore be zero. The g-value of the z-axis should be 1.

You can see small deviations for the x- and y-values and a not insignificant deviation for the z-value. The deviations vary from module to module. The accelerometer is a micromechanical component with certain tolerances.

You may have noticed that the first set of values differs more. It is advisable to discard these first values at program startup, when returning from stand-by mode and some other states. In this specific case, you could simply insert a small delay at the end of the setup.

This sketch is a guide to calibrating the ADXL345. Start the sketch and do not change the resolution. Rotate the ADXL345 slowly and try to find the maximum and minimum raw values for the axes. Support your arms because trembling distorts the values. It does not matter one or two units. Write down the values and then use them in the further sketches. How you do this, you will see in the example sketch 3.

The maximum and minimum values correspond to +1 g and -1 g, respectively (if you perform calibration on our home planet!). For the zero points, according to this method, the following applies:

Accordingly, an offset is calculated from it. For the slope:

Despite the calibration, you will see some deviations because the zero point is not necessarily really in the middle between the min and max values.

Here you can now apply the calibration by entering the values just obtained in the following function:

The function getRawValues() still provides the uncorrected raw data. getGValues(), on the other hand, uses the corrected values. This also applies to all other sketches.

In addition, the sketch calculates the angles between the axes and the horizontal from the g-values. Up to angles of 60° this works well for x and y. In the next section, you’ll learn about another function that covers higher angles. Here, however, the following simple function is used:

If you want to measure angles up to 60° quite accurately and want to start at 0°, you can eliminate the offset that still exists despite calibration. For this purpose, you position the ADXL345 as flat and steady as possible and execute the function measureAngleOffsets(). After that, you will receive the additionally corrected values via getCorrAngles().

The last function I want to introduce for this sketch is getOrientationAsString(). This determines which axis is most upwards. Depending on the orientation, it returns: x up, x down, y up, y down, z up or z down as a string.

You can see that the corrected g-values for the z-axis now look much better. The angles have a certain deviation due to the remaining offset. The corrected angles (“cAngles”), on the other hand, fluctuate close to zero.

I have taken the method of angular calculation described here from other libraries, such as MPU6050 light or Arduino-ADXL345. The advantage of this method is that it includes several axes and thus compensates for errors. To delineate the method, I have adopted the nomenclature of others and referred to the tilt angle of the x-axis as “pitch” and that of the y-axis as “roll”. You find a definition for pitch and roll angles here, for example.

Again, of course, the angle determination is only valid in the static state. Additional accelerations distort the result.

Here is the example sketch, or more precisely its main components. As a reminder: the original sample sketches are provided with many more comments.

For comparison, the method from the previous sketch is also used.

For the above output, I slowly rotated the ADXL345. With simple means (set square) I checked the values. For small to medium angles, the values called “Angle” are closer to reality, at large angles the pitch/roll method is better.

To save power, you can send the ADXL345 to sleep. The function to do this (and to wake it up) is:

If you don’t retrieve new data too often, you won’t notice any difference to the permanent wake mode. Only when the frequency of your readings is greater than the wake-up frequency will you see the effect.

In the example sketch, 10 readings are retrieved in wake and sleep mode. I have set the wake-up frequency to one second, and the readings are sampled at 300 millisecond intervals. Here is the (shortened) sketch:

For the above output I moved the ADXL345 permanently. You can see that the values in normal mode are different for each query. In Sleep Mode, as expected, 3 to 4 values are identical.

Interrupt Features of the ADXL345

General information about the interrupt features

It is important to note that the interrupts for Overrun, Watermark and Data Ready are always enabled. So, you can’t disable them, just change the output pin. Default is INT1. You have to activate all other interrupts first. You deactivate them with deleteInterrupt(type).

In the interrupt register, in the case of an interrupt, the interrupt type is stored. Reading this register deletes the interrupt so that a new interrupt can be triggered. The function for this is readAndClearInterrupts(). It returns the interrupt type as a byte. How to “translate” this can be found in the library file ADXL345_WE.h. Alternatively, you check with checkInterrupt(source, type) for a specific type.

There is another general function, namely setInterruptPolarity(polarity). This sets whether the interrupt pins are active-low or active-high (default).

First, let’s take a look at the Free Fall interrupt. In the example sketch, it is activated with setInterrupt(ADXL345_FREEFALL, INT_PIN_2) and assigned to INT2.

setFreeFallThresholds(0.4, 100) sets the acceleration limit to 0.4 g and the minimum duration for which it must be lower to 100 milliseconds. Limits for parameters and recommended values can be found in the example sketch. It is best to play around with the parameters to get to know this feature better.

I still have one example sketch for this part 1, then it’s half-time. Here we use the Data Ready interrupt to control the data output. First, I set the measuring frequency with setDataRate(ADXL345_DATA_RATE_0_20) to a slow 0.2 Hz.

The Data Ready Interrupt is always active. But to not interfere with the other “always-enabled” interrupts, I assigned it to INT2 with setInterrupt(ADXL345_DATA_READY, INT_PIN_2).

The rest is simple. The Data Ready interrupt triggers an interrupt on Arduino Pin 2. This is the signal for reading the measured values. After that, the interrupt is deleted and the next interrupt is expected.

In part 2, we will come to the example sketches for

The utensils I attached to the ADXL345 module in the post image are from the image of a Swiss Army Knife by Clker-Free-Vector-Images on Pixabay.

I would like to thank Adafruit for publishing the Fritzing scheme of their ADXL345 module.