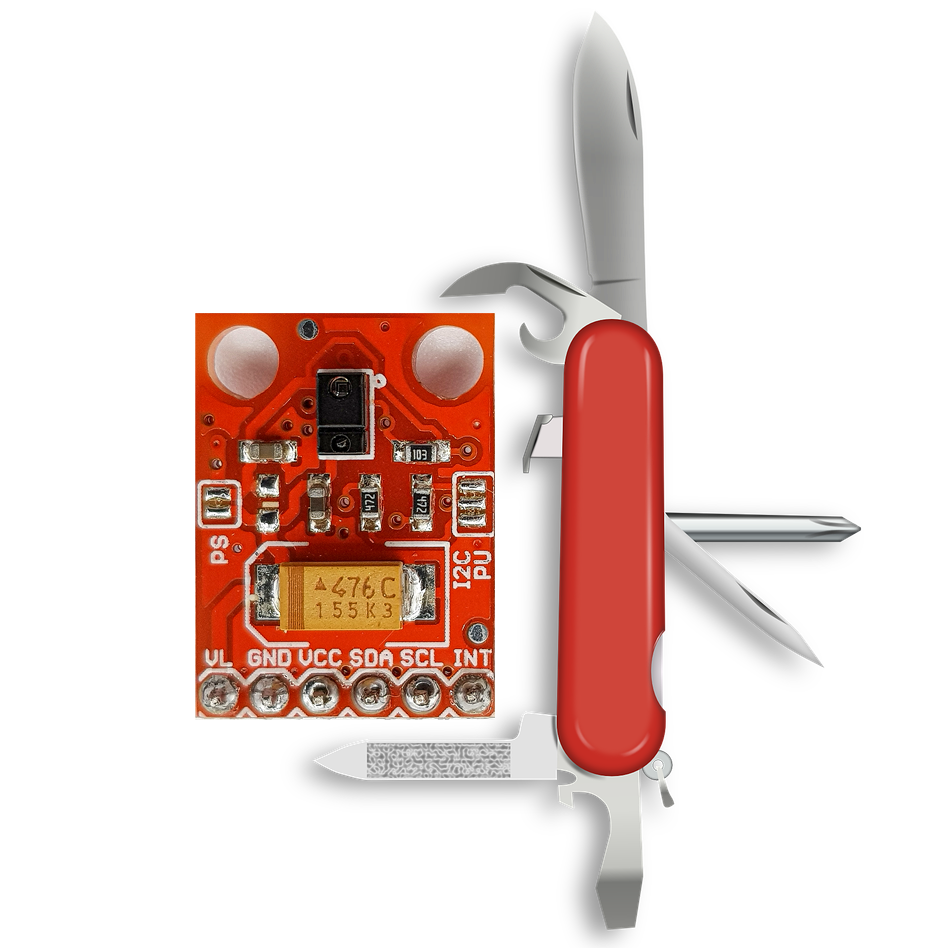 This post about the APDS-9960, more precisely the APDS-9960 module, is the first in a series about distance, motion, color and light sensors (a summary of the series can be found here). The APDS-9960 is the Swiss army knife among these sensors, because it offers:

The APDS-9960 can also be used as a motion sensor via proximity detection, but only within its limited working range of up to approx. 30 cm. The following video provides an overview of the various features.

The APDS-9960 has an amazing number of setting options and registers. Implementing this in a sketch is a significant effort. That’s why it’s a good idea to use a ready-made library that has already implemented a number of presets. I will use Sparkfun’s library in this post. I also tried the library of Adafruit and it works just as easily. However, more libraries are available on Github.

Even if you use one of these libraries, I would still advise you to look a little into the data sheet of the APDS-9960 and to deal with the library itself, because not everything that this module is capable of is documented in the examples. In addition, it might make sense for one application or another not to simply adopt the presets but to look for better ones.

The actual APDS-9960 sensor is the small rectangular, black block with the two lens-like openings. The data sheet is available here, for example. From my point of view, it is definitely worth taking a look.

Communication with the APDS-9960 is via I2C with a clock rate of up to 400 kHz. The address is set to 0x39 and cannot be changed. Reading the I2C address is always a good first step to check if you have wired everything correctly. An I2C Scanner sketch can be used for this.

Theoretically, of course, you can buy the bare sensor and add the electronics needed yourself. However, my skills are not sufficient for that and therefore I’m glad that the APDS-9960 is available as a module.

Interestingly, such modules can be purchased from Amazon in two price ranges. One is between three and ten euros and mainly includes manufacturers from China, the other is in the early-mid twenties, e.g. from Sparkfun. I can’t say whether the price difference is justified, as I have only tried some low-cost modules. However, I can at least confirm that the latter have problems with amplification (more on that later). This is also described in other posts, e.g. here.

Most APDS-9960 modules have the following pins:

You can supply the APDS-9960 via the 3.3 volt output of an Arduino UNO, but then you still have the problem that the I2C lines run at 5 volts. This can damage the APDS-9960. Therefore, one takes either a microcontroller that is operated with 3.3 volts, such as the ESP-8266, you use voltage dividers or you take level converters, such as this one.

On most modules there are two jumpers, namely “PS” and “I2C PU”:

As you can see at the top of the photo of the two APDS-9960 modules, one has closed the jumpers, the other they are open (I bought them like this). So check which version you have.

The wiring is no surprise after the previous explanations.

Whether VL – as shown – really needs to be connected to 3.3 V depends, as explained, on the setting of the jumper PS. The I2C lines do not have an external pull-up because the jumper I2C PU was connected. The LED on D13 is required for some example sketches. The same applies to the interrupt output connected to D2. The level converter needs a power supply at least on the 5 volt side.

The Sparkfun library for the APDS-9960

The library is available here on Github. As usual, you download the Zip file and unzip it in the Arduino library folder. There you will also find the example sketches, which I present right away.

The library implemented the following gestures:

The first two pairs are self-explanatory. A “Far” is reported if you hold the hand very close to the sensor and then remove it vertically to the sensor until it is outside the detection range (approx. 30 cm). For a “Near” one approaches vertically and then pulls the hand to the side. The “Near” is not triggered until the hand has been pulled away. A “none” is reported for ambiguous movements.

The included sample sketch for gesture detection is called GestureTest.ino. I have removed the general comments from the top of the sketchhere. Then I just added the important (!) line 34: apds.setGestureGain(GGAIN_1X). More on that. Otherwise, the sketch is self-explanatory from my point of view.

The problem with amplification

The APDS-9960 offers for the detection of gestures the amplification factors 1, 2, 4 and 8, which control the sensitivity of the measurement. In the library, these are called GGAIN_1X, GGAIN_2X, etc. During initialization ( apds.init() ) DEFAULT_GAIN (= GGAIN_4x) is entered in the corresponding control register. Unfortunately, the modules do not cope with this gain factor. This applies at least to the cheap parts, I have obtained from three different Chinese sources. With eight- and four-fold gain it didn’t work at all, with double gain worked unreliably, but without gain (factor 1) it worked wonderfully. It is also not a mistake of the library, since the Adafruit library showed the same behavior. The whole issue took me a lot of time and nerves.

By the way, if you set GGAIN only after apds.enableGestureSensor() and then you start the sketch, the gesture message “None” is triggered for no apparent reason. So better first adjust the gain and then turn on the gesture detection.

As already mentioned, one is first overwhelmed by the setting options when looking at the data sheet. But apart from the GGAIN problem, the other presets chosen by the library work very well. Nevertheless, you might also want to “play around” with them. However, not all parameters are accessible through public functions.

The proximity sensor does not provide distances in centimeters or millimeters, but a value between 0 and 255. The corresponding distance to this value depends, among other things, on the LED current and the gain. The included sample sketch is called ProximitySensor.ino. Here he is, but without the introductory comment lines and with a small change to which I will explain in a while:

The change I made is swapping the order of the functions apds.enableProximitySensor and apds.setProximityGain. The latter sets the gain factor (PGAIN_1X, …_2X, … 4X, …_8X) for the proximity sensor. However, in the enable function, the default value is set, namely PGAIN_4X. If you want to change it, you have to do it after the enable function. I reported this little bug on Github as an “issue”, maybe it is already fixed when you install the library.

The settings are very similar to the settings of the gesture detection:

I don’t want to go more in the details – again I refer to the library and data sheet for those who want to go deeper.

The included example sketch is called ProximityInterrupt.ino. Again, I have moved the function for setting the PGAIN value behind the enable function, otherwise it would be ineffective. Otherwise, the sketch should be self-explanatory.

If you set PROX_INT_LOW to a value bigger than the basic noise, e.g. 50, then you have two thresholds at which an interrupt is triggered.

Ambient light and colour measurement can be explained both at a time. In fact, there is not much to explain. The AmbientLightInterrupt.ino sample sketch includes the relevant functions, including interrupts. The ambient light and color channels are reported as a dimensionless 16 bit number. There is no conversion to lux or similar. Two interrupt limits can be set for ambient light.

Again, there are various setting options, especially the gain (AGAIN_YX with Y=1, 4, 16, 64), which you can set via the public setAmbientLightGain function.

I find the APDS-9960 really impressive with its many features and options. Especially beautiful is the gesture function with which you can do nice things, e.g. turn the light on or off with certain gestures. Maybe you share my joy. Have fun!