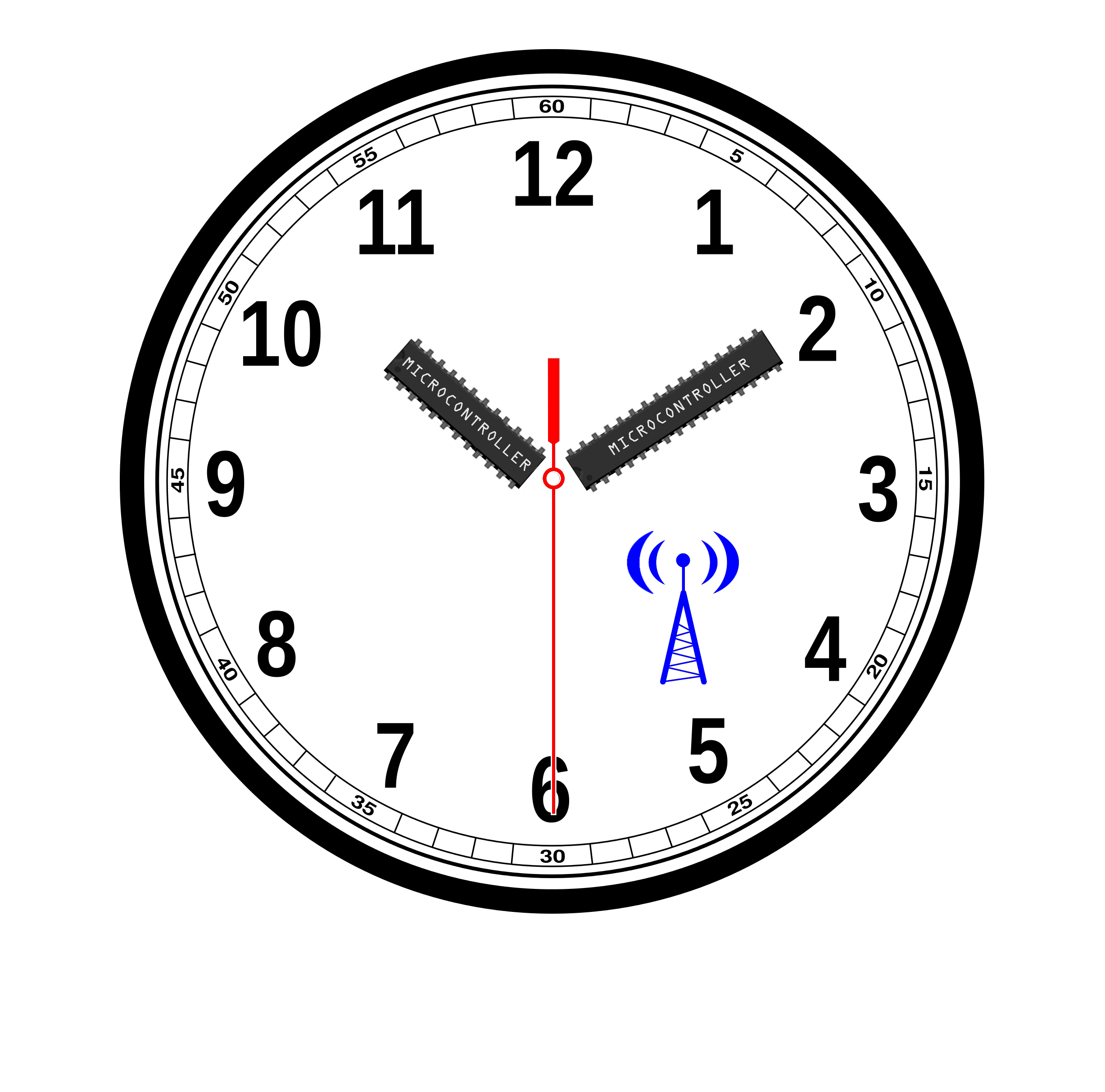 After I reported in my last post about the real-time clock module DS3231, a follow-up article about DCF77 radio clocks fits very well thematically.

I will deal with the following points:

The DCF77 transmitter is located in Mainflingen near Frankfurt in Germany. Here you can admire it on Google Maps. It has a range of about 2000 kilometers and controls a large part of the radio clocks in Western Europe. Other parts of the world have time signals that use different frequencies and are also encoded differently.

More information about the DCF77 signal and its history can be found here.

How the DCF77 signal is structured

Most DCF77 receiver modules are designed to deliver a HIGH signal while the time signal is reduced, otherwise it is LOW. This will give you sequences that look like the following:

If you have a module that works the other way around, you need to rethink and modify the example sketches accordingly.

Certain bits or sections are reserved for a specific part of the information to be transmitted:

If all parities are OK and you have received 59 bits in a sequence, you can be quite sure that the data transfer was correct.

You can get a module with antenna for 5 to 15 euros in online shops. I paid 11 euros for the model shown here, and I am satisfied with the reception quality:

This model here cost only half and is much smaller:

There was no documentation (not even for the supply voltage!), moreover, significantly more invalid sequences were obtained under the same conditions as with the other module. So there are clear differences in quality here.

However, invalid sequences are not only a question of module quality, but also the orientation of the antenna, the weather, the location (geology) and other factors can influence the reception. But occasional invalid sequences are not dramatic as long as you identify them and your code does not need to get a valid record every minute. If you experience too many incorrect sequences, try to position the antenna differently.

If you want to buy a module, it is best to see if there is a data sheet or at least basic technical data for it. Some modules can only tolerate up to 3.3 V, others up to 5 V. For the power consumption I have found consistent data of < 100 microamperes.

Receiving and evaluating the DCF77 signal

As already mentioned, the modules vary in their design. For the module shown above I used the following wiring:

If you just want to check if your module receives data at all, you can use this sketch:

Alternatively, it would work without interrupt, for example like this:

When the sketch is running, the LED should flash every second. If you look closely, you will notice that the LED lights up shorter times and sometimes longer. Once per minute, the pause is almost two seconds. Interference with reception is usually noticeable by rapid and irregular flashing.

How to capture sequences

Another few comments on the sequence:

Actually, I always preach to keep interrupt service routines (here: DCF77_ISR()) as short as possible, otherwise this can lead to problems. This is especially true if you want to use additional interrupts. Here I violate my rules quite drastically (see also here). However, it serves the purpose of recording the date and time in the background. Otherwise, you would either have to wait minutes for the process to complete or check the state of the data pin again and again in the main loop. But that, in turn, can easily collide with the rest of the code, especially if more delays come into play.

Here you can see a snapshot of the output:

The HIGH and LOW phases differ a little from the ideal lengths, but zeros and ones are clearly distinguishable.

The first recorded sequence will only be a complete one in 2 out of 60 cases, namely when you in the last two seconds of a running sequence.

Now let’s evaluate the received sequences. To do this, the ISR passes the currentBuf sequence to the evaluateSequence() function. This first splits the sequence into the relevant sections (minute, hour, day of the week, etc.).

For the parity check, I use the function parity_even_bit(). To use it, you need to include utils/parity.h. This file is part of the Arduino or AVR standard package, so you don’t have to install it. parity_even_bit() expects a byte value as an argument. The function returns “0” (false) for parity “0” and “1” for parity “1”. The date piece is greater than one byte, so I’ll check the parities of the calendar day, day of the week, month, and year individually. If the sum of the parities is an even number, then the total parity is 0. If it is odd, parity is “1”. If you don’t use an AVR Board (Arduino UNO, Nano, Mega, etc.), then don’t include parity.h and uncomment the replacement function at the end of this and the following sketches.

rawByteToInt() splits the raw value of minute, hour, day, etc. into the digits and returns the sum as an integer. These values are then output.

The blinking LED in the main loop is just to show that you can do other things there (almost) unaffected.

So it’s Sunday, February 14, 2021, 12:59. It works, but the formatting still leaves opportunities for improvement.

For example, the names for the months or days of the week could be inserted as:

But I’m going down a different, much more comfortable   path.

Using the DCF77 with the RTCLib

I introduced the RTCLib in the last post as a library for the DS3231 real-time clock module. In addition to this task, the RTCLib also offers (among other things):

I had presented all this in my last post. If you don’t understand the next sketch, it’s best to go back there.

You can download the RTCLib via the Arduino IDE or directly from GitHub here.

We use SoftRTC and set this “software watch” regularly with the DCF77 receiver. In between, the clock runs based on millis().

DCF77 and SoftRTC – the sketch

I freed the code used in the last sketch from all non-essential Serial.print() calls. Then I combined it with the example sketch softrtc.ino of the RTCLib and adapted it somewhat.

The clock is initially set to 1/1/2000, 00:00. You could also take over the system time of the computer, but I wanted a clearly incorrect start date, so that it becomes more obvious when the clock is set by the DCF77 module.

The clock is only set if there is a valid record, i.e. if 59 bits have been submitted and the three parity bits are correct.

Ideally, the software clock is set to the DCF77 time after one to two minutes, as here. In case of poor reception, it may take longer.

If you don’t want interrupts….

If you’re bothered by working with the interrupts, I have a version here without interrupts. Setting the clock is time-controlled. Since I had no desire to wait a long time, the clock is set every two minutes. Of course, this makes virtually no sense. However, you can easily change this to every few hours, for example.

The disadvantage of this method is that you can’t do anything else during the setting procedure.

The sketch is still quite communicative. You can cut it significantly if you want to use it or build on it.

In the upper screenshot you can see that the clock is set at 5:25 p.m. As specified in the sketch, the next setting is two minutes later:

The basis of the post image, the watch, comes from OpenClipart-Vectors. I owe the radio symbol to Clker-Free-Vector-Images. Both are – as usual – from Pixabay.