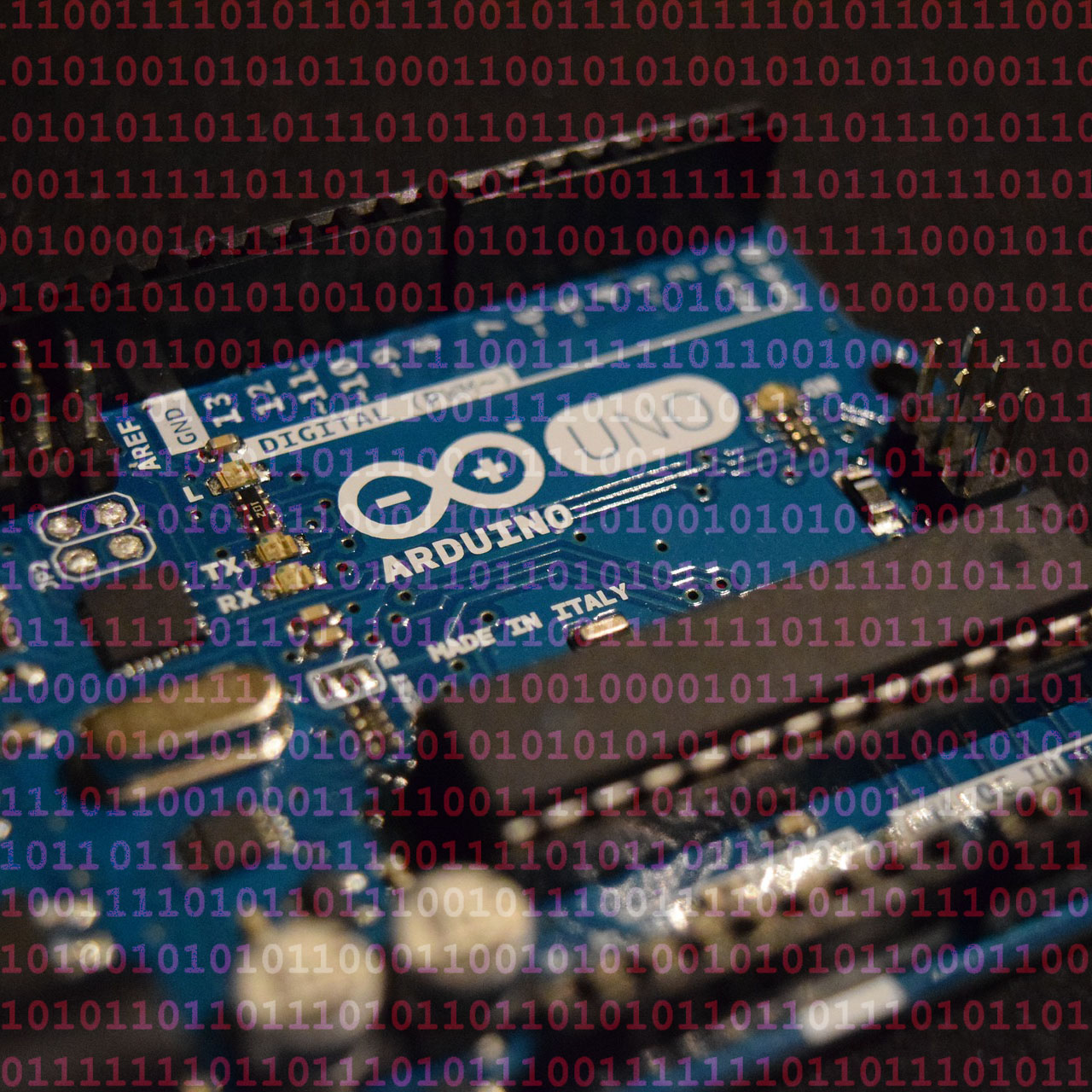 In many articles, including my last one on IR remote controls, I have used logical operations and port manipulation. By this I mean expressions such as PORTD |= (1<<PD2) instead of digitalWrite(2, HIGH). In this article, I would like to address this issue separately.

Granted, this is a little “dry”. It doesn’t really get interesting until you apply it. So far, however, due to the size of this topic there has been no room for it in my posts so far. So consider this post as a kind of reference that I will refer to when I use binary logic and port manipulation again.

I will start with logical operations (bitwise operations) and then turn to the ports of the ATmega328P and port manipulation. Then I’ll have a little practical exercise for you. Finally, there is a speed comparison and I answer the question of why port manipulation is so much faster.

Why are logical operations and port manipulation relevant?

Port manipulation, i.e. direct access to Arduino pins (or other boards or microcontrollers) via its ports, is much faster than the usual Arduino functions. Most of the time it doesn’t matter, but sometimes it does. And the logical operations with their bitwise operators are the tool for this. The grammar, so to speak.

Actually, I don’t really like the term “port manipulation”. It sounds like it would be forbidden. Basically, however, it is the more natural way to program microcontrollers. digitalWrite, pinMode and Co, on the other hand, actually obscure the view of what is actually happening at the hardware level.

Logical Operations come into play even when you are generally involved in programming registers, such as in sensors. One often has to deal with tasks such as “write 101 into the bits 3-5 of the register XY”. This can only be reasonably done with logical (bitwise) operations.

The main bit operators are:

The bit operator AND checks whether the two operands are 1 (true). If this is the case, then the result is 1, otherwise 0 (false).

The bit operator OR checks whether at least one of the two operands is 1 (true). If so, then the result is 1, otherwise 0.

The bit operator XOR checks whether exactly one of the two operands is 1. If this is the case the result is 1, otherwise it is 0. In contrast to OR this operator delivers 0 even if both operands are 1.

The bit operator NOT has only one operand. NOT reverses the value, so 1 (true) becomes 0 (false) and vice versa.

There are a few pitfalls. What will be the output of the following sketch shiftoperator_test.ino?

The ports of the Arduino UNO

The Arduino UNO has fourteen digital I/O pins (0 – 13) and the six “quasi-analog” I/O pins A0 to A5. If you look at the data sheet of the ATmega328P, the core of the Arduino, you will find the pins in a different organizational structure.

The I/O pins are organized in ports B, C and D. The pin designations are correspondingly PBx, PCx and PDx with x = 0 to a maximum of 7. For these groups there are three 8 bit registers, which I will discuss in a moment, namely DDRx, PORTx and PINx with x = B, C or D.

If you want to use an I/O pin as input or output, you do this setting in the “Arduino language” via the pinMode function. In the ATmega328P, the corresponding bits are set in the relevant direction register (DDR = Data Direction Register). Here is the structure of the direction register for port B as an example:

As an example, I would like to set the digital pin 13 of the Arduino to OUTPUT. This corresponds to pin PB5 according to the pinout scheme from above. This means that bit No. 5 must be set in the DDRB register. Access to the register is easy. The following assignment is sufficient:

It’s that easy because “DDRB” contains the necessary instructions via a #define statement in the AVR libraries (avr/io.h –> avr/iom328p.h):

If you want to set several pins of port B to OUTPUT, e.g. pin 5 and pin 3, then the statement looks like this:

If you want to set an I/O pin that you had previously set to OUTPUT into the HIGH state, you will access the responsible port data register (PORTx) as part of port manipulation. Here PORTB as an example:

A pin is HIGH if you have set the corresponding bit. To stick to the example above of Arduino pin 13:

Stop! Of course, the equivalence only applies to the effect on pin 13 (PB5) because the first assignment switches all other PORTB pins to LOW. On the other hand, digitalWrite is selective.

You can query the state, i.e. LOW or HIGH, of an input pin via the corresponding PINx (x = B, C, D) register. For Arduino Pin 13 for example:

Here, too, the restriction applies that digitalRead is selective while the PINB query in this form checks whether only PB5 is HIGH.

Use of logical operations in port manipulation

To selectively set a single or multiple bits, one uses the logical OR. For example, you can set PB5 to HIGH without affecting the remaining pins of the PORTB

Several bits, such as PB5 and PB3, are set as follows:

Occasionally, you will also find _BV(x) instead of (1<<x). “BV” stands for bit value. Both are identical as a look into the library file sfr_defs.h shows:

The selective deletion of bits is also simple, but it is not necessarily obvious at first sight. Again, I take PB5 as an example:

Of course, you can also delete several bits simultaneously, here for example PB3 and PB5:

The logical XOR is suitable for inverting individual bits. One takes advantage of the fact that ^1 turns 1 to 0 and vice versa. ^0, on the other hand, is neutral. This way you invert PB5 selectively:

Or, if multiple bits shall be inverted:

If you want to invert an entire port, two variants are possible:

This is no surprise. The expression

Now you can try it out if you want. For this purpose, build the following circuit:

Then try the following sketch and play around with it a bit. Does it do what you have expected?

Port manipulation on other microcontrollers

Transferring what you have just learned about port manipulation to other microcontrollers is easy, at least as far as AVR representatives like ATmegas and ATtinys are concerned. A look at the pinout scheme, which you will find in the data sheet, is usually sufficient. For example, the ATtinys 25 / 45 / 85 have only PORTB with pins PB0 to PB5:

85For non-AVR microcontrollers, direct port access can vary widely. For example, for the ESP8266 ESP01, there is one register for setting the bits and another for deleting them:

How much differs port manipulation from digitalWrite in terms of speed? To clarify this question, I used the following mini sketch and looked at the result of both methods on the oscilloscope.

HIGH/LOW cycles, when using digitalWrite, have a maximum frequency of 113 kHz, with port manipulation it is 2 MHz, so a good 17 times faster. 2 MHz means that only 8 processor clocks per cycle are required.

To determine the speed of digitalRead vs. PINx &= (1<<Pin) I used both 100,000 times and determined the time required to do so.

The direct PIND query is therefore a good eight times faster than digitalRead. Division by 100000 shows that the digitalRead function requires about 3.5 µs, while direct querying only takes about 0.44 µs. Of course, this is not exactly the case, as the loop processing itself takes some time. But it shows at least that the difference is significant.

Where does the difference come from?

I have taken the Arduino in the post image from Daan Lenaerts on Pixabay. The zeros and ones (which I cut out, colored and inserted as a layer) I owe to Gerd Altmann, also on Pixabay.