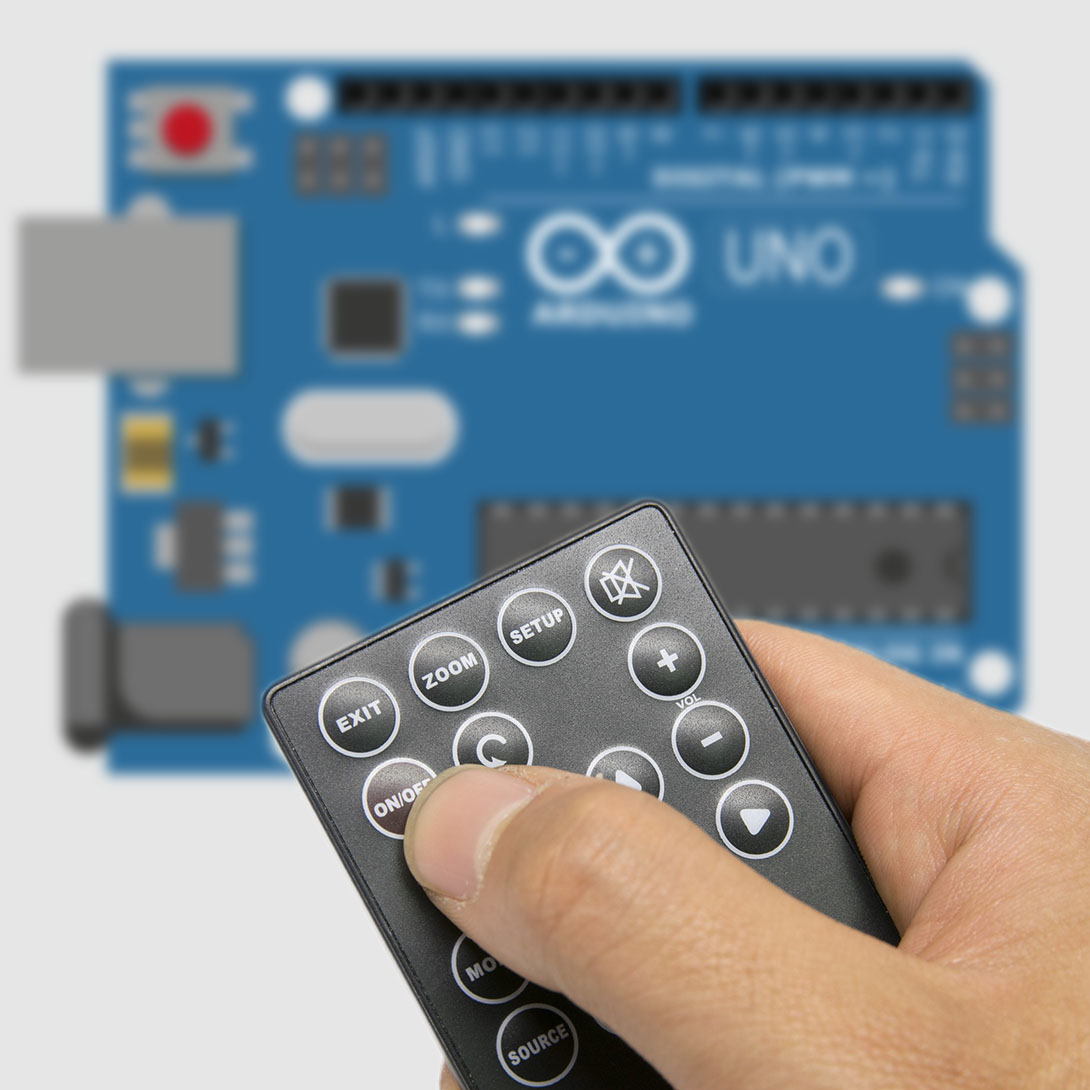 In my last post, I dealt with infrared (IR) proximity sensors. In this post, I would like to stick to the topic of infrared, but this time it is about IR remote controls. At first, I will go into the transmission technique via IR in detail. Then I will explain how to build IR remote controls yourself. Finally, I would like to show you how you can remotely control your projects with an IR remote control using a suitable library. Of course, you can also go straight to the last chapter if you are less interested in the background or if you don’t have time.

Since every warm body emits more or less infrared light depending on its temperature, IR radiation is omnipresent. This can affect targeted signal transmissions. IR remote controls use a trick by sending pulsed signals. As a result, the signals differ significantly from the ambient radiation, which can be filtered out accordingly. Most often, IR remote controls use a pulse rate of 38 kilohertz.

Infrared radiation can be detected using IR-sensitive photodiodes. I described this type of IR sensors in my last post. You may have seen them as “flame sensors” on corresponding modules.

With such photodiodes, however, one captures the entire IR radiation, whether pulsed or non-pulsed. If you only want to fish the pulsed radiation out of the “soup” of infrared light, you must use such three-pin ones:

Also, a receiver for pulsed signals contains a normal IR photodiode (see diagram below). The AGC unit (automatic gain control) amplifies the signal. The bandpass filter cleans it and finally the demodulator converts it into a continuous signal (continuously relating to the 38 kHz). At the end there is a transistor, which switches to Ground in case of an incoming signal. This means that pin 1 of the receiver changes from HIGH to LOW. Note: not all IR receivers have the same pin assignment – look at the data sheet. Also in the Fritzing schematic below I have a different assignment (because I only found this one).

I would now like to show how you can analyze an IR signal. Further down, I use a more comfortable library. But I find it quite exciting to do it “manually”.

GND of the receiver is connected to GND, VCC to 5 volts and DATA to an I/O pin (I chose pin 2). The receiver can also be attached directly to the 5V supply of the Arduino because it draws less than 1 mA of electricity.

Signals from IR remote controls are double pulsed, so to speak. A signal consists of a sequence of pulses, each pulse having a width of several hundred microseconds to a few milliseconds. I call these pulses main pulses because I couldn’t think of anything better. So, that is not a technical term. Different lengths of pauses are between the main pulses. The main pulses in turn consist of many 38 kHz pulses.

Here is a typical example of an IR signal:

The main pulses are easily recognizable. You also see that the signal basically consists of two identical main pulse sequences separated by a longer pause. This is not uncommon with IR remote controls.

At higher resolution, the 38 kHz pulses within main pulses are then revealed. Here is an example of a magnified main pulse:

On the receiver side, the 38 kHz pulses are demodulated. In addition, the signal is reversed due to the set-up of the receivers described above. That is, LOW becomes HIGH and vice versa. Here you can see again the signal from the penultimate picture, but at the receiver:

The evaluation sketch for signals on the receiver

The evaluation is about measuring the pulse and pause widths. The best way to do this is to first define a suitable unit of time (“timeSegment”) that represents the resolution. In the following sketch, the Arduino checks whether the data pin on the IR receiver is HIGH or LOW after each time unit expires. The time units are added until a HIGH/LOW or LOW/HIGH change takes place. This is how you move through the signal piece by piece.

The counter for the pulse width (or pause width) is defined as pulseWidthCounter in the sketch. The pulse pause pairs are stored as an array (irSignal). The pairs are counted by the pulseCounter. The end of a signal is reached when there is no pulse for a long time (maxCount is reached).

There are two things to consider in this procedure:

If a signal is fully transmitted, it is output once on the serial monitor in pairs and once as an array. You can copy the latter directly into the transmitter sketch that we are discussing in a moment. The last measured value is maxCount. We do not need this because it is no longer part of the signal. Accordingly, I omit it in the array output.

The output on a concrete example

For testing, I have selected the remote control of my satellite receiver. In fact, the “Channel+” button. Incidentally, I also used this signal for the oscilloscope measurements above. To calculate the pulse widths in microseconds from the numbers, you must of course multiply them by twenty. But I found it easier to work with the smaller numbers.

Build your own IR remote controls

And now we can take the signal that has just been analyzed and send it with an IR LED. We build our own remote control or simulate the existing remote control. But first I have to explain how to generate a 38 kHz signal.

As an infrared source, you best use an IR LED. It basically works like an LED for visible light. IR LEDs are also available in different “colors”, i.e. in different wavelengths. 850 or 940 nm are the common wavelengths. According to my research, 940 nm seems to fit better to most receivers. Otherwise, the IR LEDs differ mainly in their maximum current. The IR LEDs I use have a current of 100 mA at 1.2 to 1.5 volts. When selecting resistors, it should be noted that for pulsed signals effectively only half the current is needed. In addition, the IR signals are very short. Nevertheless, you should consider using an external power source and switching it on with a transistor like in my circuit above. As a series resistor I used 15 ohms.

To let the IR LED pulse with 38 kHz, one can theoretically use the function tone(pin, frequency) or noTone(). More information about this feature can be found here. For tone() you have to choose a PWM-enabled pin. In fact, with tone(5, 38000) I could generate beautiful pulses of the correct width at pin 5:

I had already been able to use the tone() function successfully in my last article about self-built proximity sensors. So, I wanted to generate my signal with a construction like: tone – delay – noTone – delay. But for reasons that I am obscure, it did not work. Does anyone have an idea? Do the tone/ noTone commands take too much time? By the way, the variant tone(pin, frequency, length), i.e. without delay and noTone does not work either because length is given in milliseconds, which is too rough for this purpose.

However, there are still two alternatives that work. Either you create the signals via the digitalWrite function or via the faster variant of direct port access. Here’s the sketch:

If you opt for digitalWrite, you’ll have to reduce the delays from 13 microseconds to 10 microseconds, as the digitalWrite function requires about 3 seconds (at least on the Arduino UNO). Otherwise, this happens:

If you choose the variant with direct access, you can stay at 13 µs. The results of the measurements would even suggest taking 14 µs (see next picture). Interestingly, a microsecond seems to be swallowed somewhere!? Can anyone explain this to me? No matter, I left it at 13 microseconds and it worked.

There are other methods to generate fast PWM signal (via the internal timers of the AVR MCUs), but this would lead too far here.

The following sketch simulates the “Channel +” button of my remote control. The circuit still corresponds to the Fritzing scheme from above. The channel is incremented every ten seconds. An automatic zapper, so to speak. Pretty simple, but I would just like to showcase the principle. If you implement more signals and then assign them to buttons, you can recreate an entire remote control in this way.

The sketch should not be difficult to understand. The previously decoded signal is used. The length of the array is determined by its size in bytes. I borrowed and modified the pulseIR function from an Adafruit tutorial.

I’ve tried it all and it works.

Most of you will want to use IR remote controls to remotely control projects. The procedure explained so far is a little complex. There is also the question of how to judge whether a signal matches a reference. Because if you record a signal several times, you will see that the measured length of the individual pulses varies somewhat.

Smart people have developed libraries for the detection and coding of signals from IR remote controls. These are based on the fact that the signals of IR remote controls can be assigned to specific protocols, such as NEC, Sony, Panasonic, etc. These have certain patterns and allow the signal sequences to be represented in a compact value instead of an unwieldy array.

There are a number of good libraries. The classic is IRRemote by Ken Shirriff. Personally, however, I recommend the LIBRARY IRLib2, as it is compatible with a variety of boards. When installing, it should be noted that the library is actually a collection of libraries. Therefore, if you download the zip file, you must not unzip it directly in the library folder. Instead, you unzip the zip file somewhere and then copy the main folders to the Arduino library directory. The library cannot be installed via the convenient Arduino library manager.

A good tutorial about the library can be found here on the Adafruit learning web pages. I would just like to give a brief introduction in this post.

After installing the library, take the example sketch dump.ino without further adjustment. The circuit needed for the sketch is still the same as at the beginning of this article.

As a remote control I have chosen a very handy and cheap model. Such remote controls are available in a wide selection on Amazon or eBay:

Then I decoded the signals of keys 1, 2 and 3. Here is the output of the dump.ino sketch for the key 1:

The relevant output is the “Value” (marked in red), in this case FD08F7. That’s a bit more affable than the long series of numbers before, isn’t it?

With the appropriate codes you can then remotely control everything controllable, be it lamps, cars, music or whatever. Here is a minimal example where one of three LEDs is switched on with my remote control, an LED zapper, so to speak.

And here is the corresponding circuit:

Some time ago I wrote a post entitled “Own radio protocols“. This involved communication with 433 MHz modules using specially developed protocols. The methodologies presented there can be transferred to infrared technology. So, you can then send e.g. text, measurement results or the like. Have a look if you are interested.

I thank Chris Young (cyborg5) for his library and tutorial.