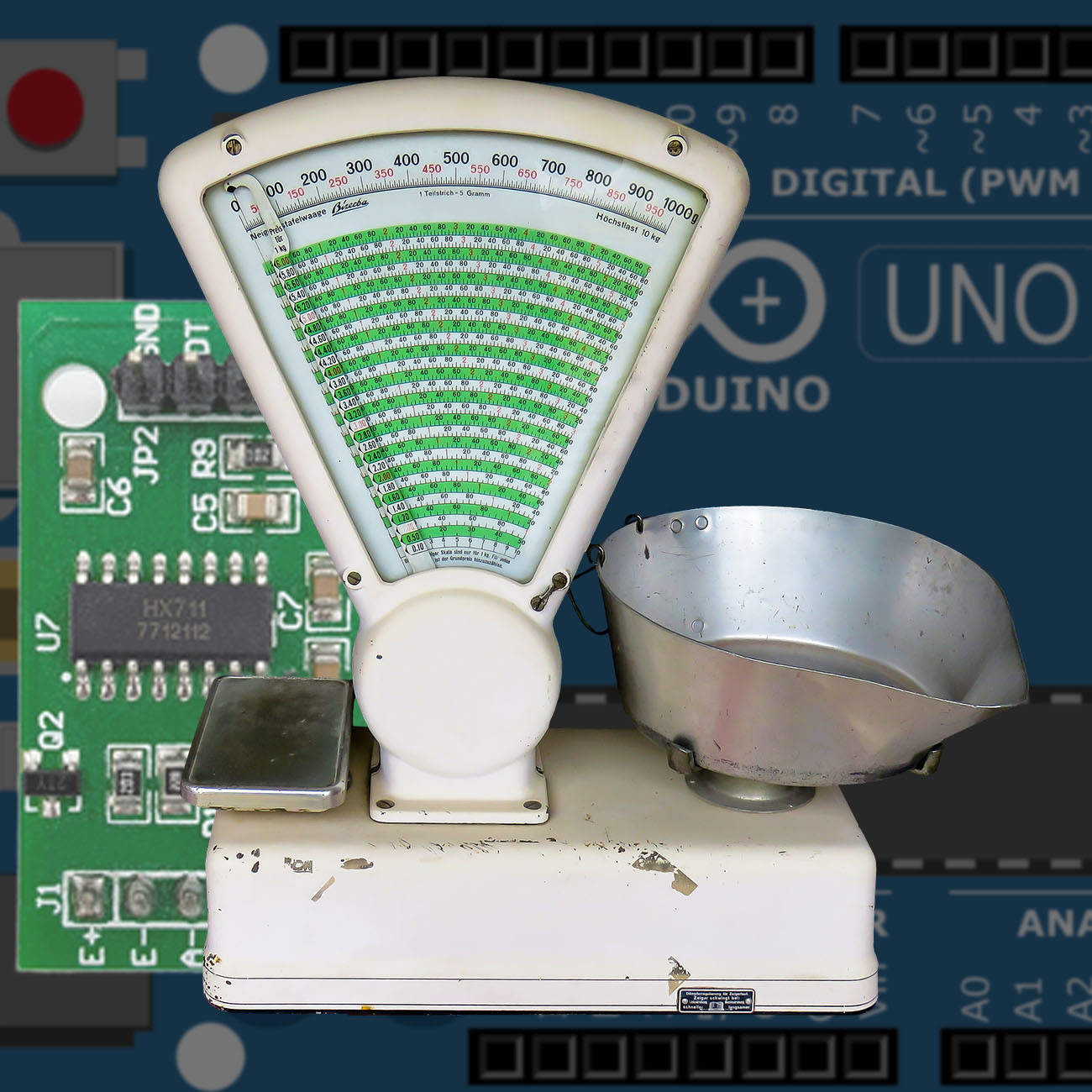 With an HX711 module and a load cell, it is easy to build an amazingly exact scale. In this article, I would like to show how this works in principle.

My goal was to achieve the same functionality as my digital kitchen scale:

To build the scale, you need a load cell and an HX711 module. You can buy both as a kit. If you search for “HX711 load cell” on Amazon or eBay, for example, you’ll get dozens of offers for a few euros. Select a load cell with the weight range that is right for you. For this post, I chose a 2 kg cell.

That being said, I can’t provide you with a detailed shopping list because it depends too much on your specific wants and needs. I recommend reading first this article and then decide for yourself.

The load cell is slightly bent by the weight of the load to be weighed. Under the white glue there are four strain gauges which build a Wheatstone bridge. Their resistance value changes with the degree of elongation, i.e. with the weight. The resistance generates a voltage drop, which in turn is evaluated with an A/D converter. In my blog post about strain gauges, I explain the details.

The change in voltage drop with increasing weight is small. I measured a few millivolts per kilogram. The A/D converter of an Arduino UNO or an ATmega328P is not suitable for this purpose. The HX711, on the other hand, has an impressive resolution of 24 bits (= 16,777,216).

The HX711 itself is actually the sixteen pin chip on the module. Since it still needs a few parts to work properly, it is convenient to use the ready-to-use module. If you are interested in more technical details of the HX711, you find a data sheet here.

You can’t avoid some tinkering. The load cell must be installed in a way that it will bend under weight. I just took a board which I found in my cellar and sawed off two equally sized pieces. I placed the load cell between the boards with spacers.

I drilled two holes through the bottom board and attached the load cell with two M5 screws. In addition, I added some rubber spacers to the underside.

For the other side, M4 screws are actually provided. However, in order to have a smooth support surface for the weighing material, I did not want to pierce the upper board. That’s why I just took a few wood screws.

Connect the load cell cables to the module as follows:

This is the interim status:

I used Olav Kallhovd’s HX711 ADC library to control the module. You can download it directly from Github here or install it via the Arduino IDE library manager.

The module can be operated with voltages between 2.6 and 5.5 volts. The module is < quite economical. Its power consumption is 1.5 milliamperes. The DT pin is connected to the Arduino Pin 4, SCK is attached to pin 5. You can choose other pins if you want.

Calibration of the balance

To calibrate, you need an object with a known weight. The weight should be exactly known to the gram and not too small. It is best to take a second balance.

The beauty of the library used here is that it makes life – or at least the balance calibration 😉 – easy for you. Select the “Calibration.ino” sketch from the library’s examples. I have printed it here unchanged:

Start the sketch and open the serial monitor. Wait until the following message is displayed:

Then take the weight, put it on the scale, enter the weight in grams and press Enter or click on Send. Write down the “calibration value” or have it written in the EEPROM of the Arduino UNO. The balance is now calibrated and provides the weight.

If the weight drifts a little, then repeat the calibration and try a longer “stabilizing time” (line 145).

Regular operation of the HX711 balance

After calibrating the scale, you can now go into regular operation. The sketch “Read_1x_load_cell.ino” is a good starting point for this. You only have to enter your calibration factor in line 41 or – if you have it in the EEPROM – uncomment line 45. Otherwise, the sketch works “out of the box”. If you are using an ESP8266, you will also need to uncomment on line 43.

For the tare you enter a “t” in the serial monitor.

Maybe you don’t want to tare the balance when you switch it on? Then, in line 48, change the value of _tare to false. You will then get a “fantasy value” as a measurement result. Write down this value and subtract it from future measurement results. You have frozen the tare, so to speak.

I then tested the HX711 based balance against my kitchen balance….

… and the results were right on the gram!

Output via an OLED display

To make the scale independent of the PC, you need an output medium. I have selected a small OLED display that requires only a few milliamperes of power. It is controlled via I2C using the libraries Adafruit GFX and Adafruit SSD1306. If you want to do the same, you can download the Github libraries from the links or install them via the library manager of the Arduino IDE. I do not go into the details here because that would go beyond the scope. In addition, you might want to use completely different displays or seven-segment displays.

A few notes on the following sketch. I put a bit of effort into displaying the weight right-aligned. This is done in the floatToDisplayString function. First, the function determines the number of blanks and then attaches the weight as a string.

Tare measurements are requested via interrupts at pin 2. The interrupt is triggered by a button. When the button is pressed, the variable taraRequest turns true and thus a tare measurement is initiated in the main loop. During tare measurement, the balance outputs “Wait” on the display.

The rest of the sketch should be reasonably self-explanatory (of course, everyone claims that for their code…). If you have questions, ask!

The next evolutionary step: The scale goes to sleep

Then I wanted the scale and its components to go into standby mode when there is no change in weight or a new tare measurement being requested for some time. Since the Arduino UNO still consumes a lot of power in sleep mode (see my penultimate post about Sleep Modes), I used the bare ATmega328P here. I have described here how to program the ATmega328P with the Arduino IDE. The circuit for this is as follows:

In the sketch for this variant, I introduced the variable lastWeightAsFloat that stores the value of the last measurement. This value is compared to the current result. As long as the last and the current weight differ (difference < 1 g), the balance is obviously busy. And during that time the variable tLastChange is repeatedly updated to millis . The same happens during tare measurement. Once per main loop tLastChange is being compared with millis . If the difference exceeds 120,000 (= 2 min), the balance is sent to sleep. First the display is switched off, then the HX711 module and finally the ATmega328P is put into deep sleep mode.

An interrupt awakens the ATmega328P. Since the button for tare measurement triggers an interrupt, it also acts as awake-up function.

With this setup, I have measured a power consumption of 139 microamperes in sleep mode. That’s 3.3 milliampere hours per day. So a battery should last for some time.

Turn off the balance completely

Then I thought about how to turn off the scale completely without installing an additional switch (because everyone can!). Strictly speaking, the question is how the scale can turn itself off.

I solved the task with a thyristor. A thyristor has some similarities with a transistor. It has three connections, namely the cathode, the anode and the gate. A small current pulse at the gate opens the connection from anode to cathode. Unlike the transistor, the thyristor remains conductive as long as the current does not fall below a certain threshold. The MCR100-6 I used has a typical threshold of 0.5 milliamperes. Since the power consumption in sleep mode is much lower, the thyristor locks. The thyristor is “ignited” when the tare button is pressed. This is what the circuit looks like:

But there was a problem: As long as the thyristor is open, the voltage at gate remains high. Since we have a connection to the tare function, the voltage at the interrupt pin remains also high (orange line). This means that the tare request no longer works. That’s why I’ve installed a diode that blocks the way in that direction.

You can use the previous sketch. Lines 122 to 125, i.e. the actions after the wake-up, are of course never executed and can be deleted accordingly.

I would like to thank Olav Kallhovd for his great library. The libraries of Adafruit helped me control the display.

I owe the scales on the post picture to Gerhard Gellinger on Pixabay. I have used the Arduino in the background several times. It comes from Seven_au on Pixabay.