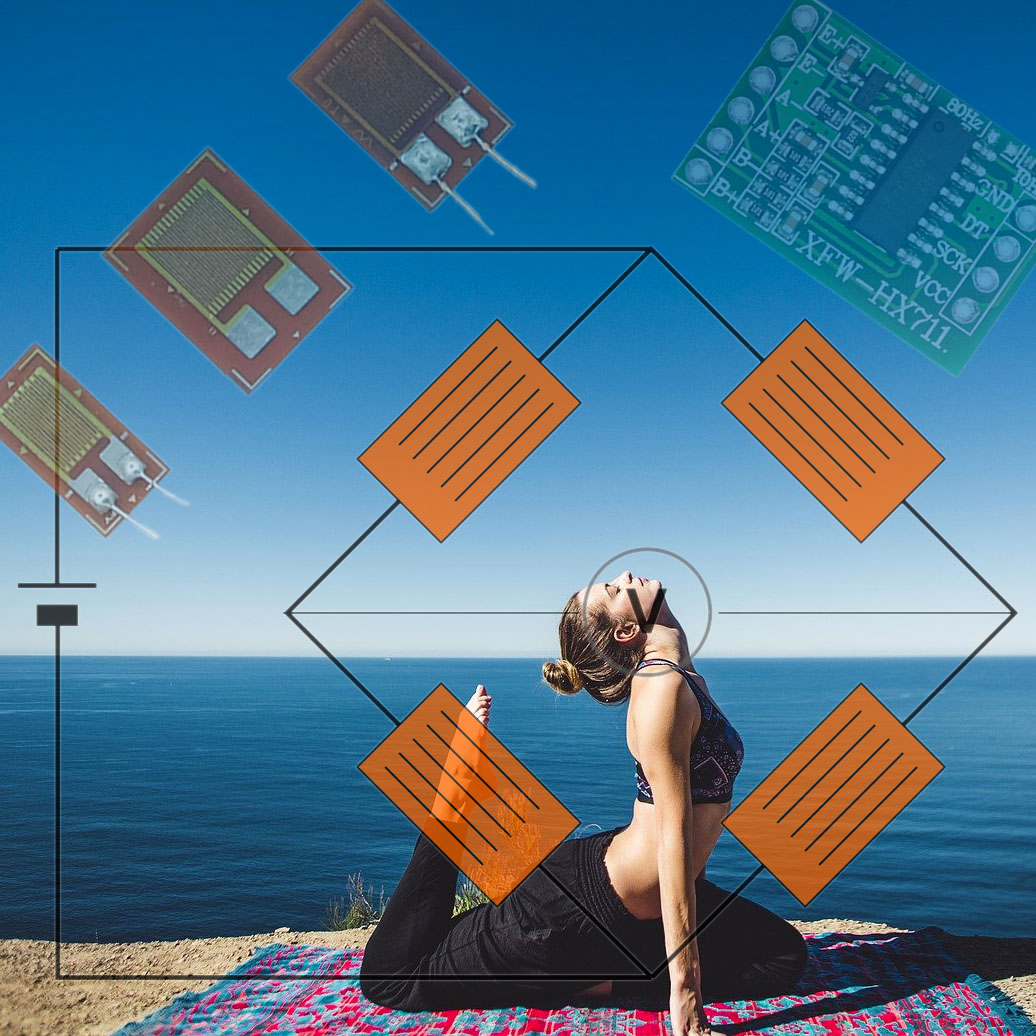 Much has already been published about strain gauges. However, there are very few articles that really show concretely how to connect the strain gauge and evaluate the measured values with a microcontroller. I would like to close this gap with this article. Specifically, I will cover the following:

What is a strain gauge and how does it work?

A strain gauge is a stretchable resistor whose resistance value changes linearly with strain. There are a wide variety of shapes and materials. The classic that you can get for little money in online shops is the foil strain gauge:

The foil strain gauge consists of a carrier foil on which a thin metallic conductor path is located. The metal used is often constantan or another alloy with low temperature dependence. An overview of different strain gauge designs can be found on the recommendable web pages of HBM.

The principle of operation of a strain gauge is simple. The resistance of a body depends (among other things) on the specific electrical resistance of the material, the diameter and the length. If the strain gauge is stretched, the diameter of the conducting path is reduced and the conducting path becomes longer. Consequently, resistance is increasing. In the case of compression, on the other hand, it is the other way around.

A strain gauge has a certain base resistance. The most common are strain gauges with 120 or 350 ohms. These values are not standardized, but have simply become established. The sensitivity of the strain gauge is described by its so-called k-factor. For a resistor R of a length l:

The maximum elongation of commercially available foil strain gauges is often specified as 2%. The k-factor is usually 2 to 2.2. This results in the following maximum resistance change for a 120 Ohm strain gauge:

In most cases, however, you work far below the maximum limits. The relative resistance changes to be measured are correspondingly small. Since resistors are measured by the voltages that drop across them, the same is true for voltages. Typically, fractions of millivolts must therefore be measured.

The measurement of low voltages is not a problem in itself. The sticking point is the small relative change due to the large underlying. To measure only the voltage change, you can use the Wheatstone bridge circuit:

I do not want to go too far with the explanation. If you need further information on the basics, I recommend the relevant HBM pages. Here are the main points:

There are several reasons for using multiple strain gauges:

A detailed article can be found here.

Gluing and wiring the strain gauges

Gluing of strain gauges is a science in itself. The choice of the optimum adhesive depends, among other things, on the application temperature, the surface roughness and the expected elongation. Again, I recommend taking a look at the HBM pages. The problem is that these adhesives are quite expensive. However, the good news is that you can use ordinary cyanoacrylate glue (superglue) if you do not need the highest precision and the elongation is not too high. There are also special products for use as a protective layer for strain gauges. I just used simple tape in my experiments.

If you use strain gauges with pre-installed connection cables, you must check whether the cables are insulated and take appropriate measures. If your strain gauges do not have wires, you should solder them on before you glue them on. That’s a little fiddly, but it works. In addition, it is recommended to twist the connection cables (which I read too late!).

When gluing, be careful not to get your fingers glued down. I pressed the strain gauges on with household foil. And less glue is more! Thick adhesive layers are counterproductive.

I had first soldered cut jumper cables to the strain gauges and built the Wheatstone bridge on the breadboard. I thought this was a good idea to stay flexible for my experiments. However, I advise against this. The contact resistances are not negligible. Every touch of the cables changed my readings. It wasn’t until I firmly soldered Wheatstone bridge that my readings became stable.

Strain gauge measurements with the HX711

Maybe one or the other of you has previously dealt with HX711 based scales. The load cells and the HX711 module are sold in a set. I once removed the protective layer of a load cell and lo and behold: four strain gauges (two at the top, two at the bottom) come to light. So it is obvious to use the HX711, or – conveniently – an HX711 module for measurements with strain gauges.

The HX711 is a 24 bit (!) ADC that is particularly suitable for voltage measurements on Wheatstone bridges. It is operated with 2.6 to 5.5 volts. The pins E+ and E- provide the supply voltage for the Wheatstone bridge (U0 according to my figure above). The output voltage of the bridge (points A and B in my drawing) is read at pins A+ and A- (channel A).

The module has a conversion frequency of 10 Hz preset. To change it to 80 Hz, desolder the (zero) resistor at the 10 Hz label and connect the contacts at the 80 Hz label. However, 10 Hz should be sufficient for most applications.

There are no more settings. A data sheet for the HX711 can be found here.

Connection to the MCU

Here is an example of connecting the HX711 to a Wheatstone bridge (simplified below) and a microcontroller:

The HX711 outputs its measured values via DOUT. In its basic state is DOUT HIGH. The HX711 is controlled solely via the SCK pin. You first set the SCK level to LOW.

This is how it looks schematically:

The data sheet contained a small error. Gain 64 is on channel A. I have corrected this here.

Sketch for reading the raw data

This may all seem a bit confusing. However, the programming is simple:

A practical test with strain gauges and the HX711

I made a first attempt with a half bridge, a second with a full bridge. In the half-bridge test, I used 120 ohm strain gauges and 100 ohm resistors on the opposite side. Since I only used a small part of the measuring range of the HX711, I did not have to balance the bridge.

In my experiments with the half-bridge, the metal was not well suited. When placing weights, a stable measured value was achieved only slowly. When the weights were removed, the readings changed slowly and did not completely return to baseline. In other words, the metal has not only deformed elastically, but also plastically.

The metal strip I used my full bridge test was more suitable. Using a known weight (54 g), I determined a slope factor (rawToWeight) and calibrated the “scale” this way. I also applied a tare button. This is what the sketch looked like:

And here is the output with different, known weights. To get this output, I lowered the output frequency to have enough time to change the weights.

Not so bad, right? A certain deviation in this design of a scale is because the weighing material must always be placed exactly in the same place. As mentioned before, I didn’t aim to build a scale. I just wanted to show that strain gauges can be used excellently with the HX711.

I could easily fill several posts with the topic of operational amplifiers (op amp for short). That is why I am not going to explain them in detail here. If you want to take a closer look, I recommend this web page. Just this much:

The pinout scheme is the same for all the above representatives:

The circuit amplifies the voltage difference between V1 and V2 according to the following equation:

V1 and V2 are the voltages at points A and B (see below) of the Wheatstone bridge. There is something important to consider. If V1 is greater than V2, then VOut should be negative. However, this would only work if you supplied the op amp with negative voltage. The solution: You attach another potentiometer with which you can adjust the bridge voltage between A and B. Bring the output voltage to the positive range enough to measure the expected values. The potentiometer should be rather high-impedance because then setting is easier. I used a 1 MΩ potentiometer.

You can measure the amplified voltage directly with the ADC of your microcontroller. However, these internal converters are often not particularly accurate, as e.g. the ADC of the Arduino UNO or the ESP32. Better is an external A/D converter like the ADS1115.

Practical example of strain gauge measurements with an instrumentation amplifier

Again, I used my metal strip with the full bridge and tried to measure weights. For the instrumentation amplifier I used the following resistors:

This is what the circuit looked schematically with Fritzing:

And here is the sketch:

I had noticed that pressing the tare button affects the reading (interesting finding!). That is why I have included a delay(2000) in line 21.

With a known weight, I determined the conversion factor from millivolts to grams (milliVoltToWeight). This is what the output looked like after pressing the tare button and after applying a 54 g weight:

Not so bad either, I think. By using averaging or damping functions, the noise of the values can be reduced.

Alternatively, you can use a differential amplifier circuit. his requires only one operational amplifier and one less resistor.

Here, too, you have to make sure that (V2 – V1) does not become negative. So, I added a potentiometer again to set the baseline of the bridge output voltage to a positive value.

In my experiments, I used full bridge again. The resistors R1 and R2 for the OpAmp were 330 ohms, R3 and R4 were 680 kOhm. This results in a gain factor of ~2061. This allowed me to achieve similarly good results as with the instrumentation amplifier circuit.

For the lazy ones: a ready-made solution

If you do not feel like soldering and you can get by with a single strain gauge, then I can recommend such a ready-made solution:

On the module there is an LM358 based amplifier circuit with fixed gain factor. The potentiometer is used to set the zero point. In principle, this is similar to the circuits described before. You only have to connect 5 volts and can read the output voltage directly. I tried such a part and it worked flawlessly. You can get these modules on eBay or AliExpress for a few euros. Just search for “strain gauge” or “strain gauge module”.

The lady with the stretching exercise on the post picture, I owe Pexels on Pixabay.

Bruce Tsao created the HX711 as a Fritzing component. You can get it here on GitHub.