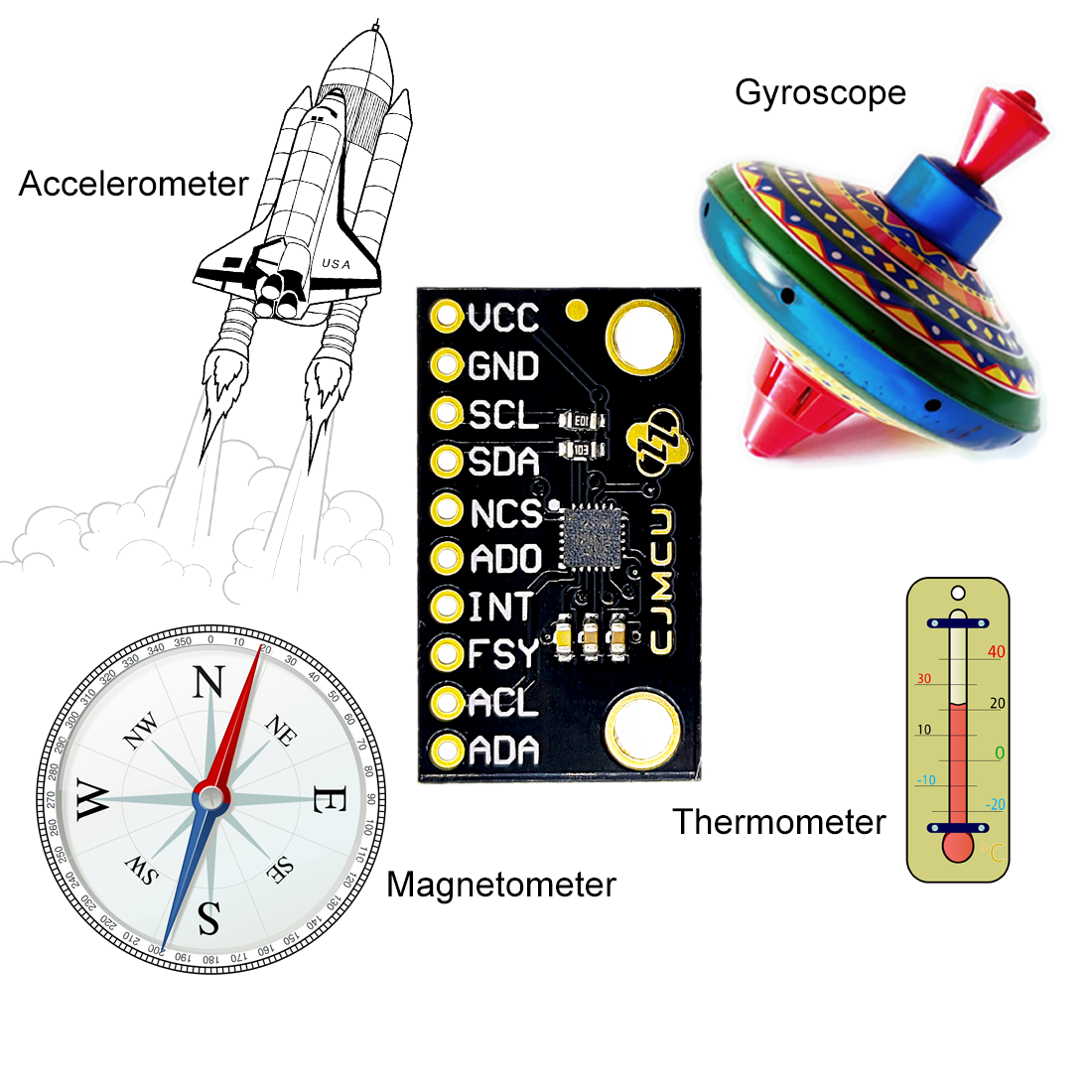 In this article, I introduce another 9-axis sensor, the ICM-20948. A few months ago I had already reported on its predecessor, the MPU-9250. The MPU-9250 is marked by the manufacturer as “EoL” (End of Life). But even though it will certainly be available for quite a while, it is time to take a closer look at the successor.

“Under the hood”, i.e. at register level, the differences are considerable. So, even if it seems otherwise – the creation of the library was more than a small modification of the MPU-9250 library.

Features and specifications of the ICM-20948

The ICM-20948 is called the 9-axis sensor because it combines three sensors, each covering three axes. It is:

Such combined sensors are often referred to as IMU for “Inertial Measurement Unit“.

I have already described how gyroscopes and an accelerometers work in my article about the MPU6050. The magnetometer works based on the Hall effect. You find a good explanation here.

The main technical specifications of the ICM-20948 are:

The ICM-20948 allows the control of up to five additional sensors via an auxiliary I2C interface. The measured values are stored in the registers of the ICM-20948 and read from there.

The magnetometer is not really integrated into the ICM-20948. It has seperate registers and its own I2C address. You can only control it via the auxiliary interface just described. But don’t worry, you don’t have to deal with it because my library takes care for everything in the background.

Further information can be found in the technical data sheetof the ICM-20948 and in the data sheet of the magnetometer AK09916. You can read about the differences between the MPU-9250 and the ICM-20948 here.

The ICM-20948 offers the possibility to process the data measured by it and other external sensors. That relieves the microcontroller. For this purpose, the ICM-20948 has the so-called Digital Motion ProcessorTM, DMP for short. However, the implementation of the DMP functions would be an effort for me that exceeds my capacities. Even without that, I’ve already invested several dozen hours in the development of the library. In addition, most hobby users would probably not use the DMP functions at all.

I solved the problem by inserting a level shifter and additionally pulling down the voltage on the 3 volt side with 6.8 kΩ resistors. I determined the resistor size empirically. Previously, I worked for weeks without additional resistors, i.e. with 3.3 volts. I did not destroy any ICM-20948, but it is outside the specification.

Connect the address pin AD0 to HIGH (1.71 – 1.95 volts) or GND, depending on which address you want to use. In some example sketches I also use the interrupt pin INT, which I attached to the Arduino pin 2.

Other pins, not used by me:

I have also implemented the faster control via SPI. You find an example sketch as part of the library.

Introduction to the ICM20948_WE library

I tried some libraries, but I couldn’t really get excited about any of them. That’s why I wrote my own library, which you can find here on GitHub. Alternatively, you can install it directly using the library manager of the Arduino IDE.

The problem with the ICM-20948 is that it has an incredible number of setting options due to its 4 sensors plus I2C auxiliary interface. And although I haven’t implemented all the functions, my library includes fifty-nine public functions. To explain the use of these functions, I have provided the library with thirteen example sketches.

I will now walk you through the example sketches, which is a pretty dry read. Maybe just try them out and come back here if you don’t understand something.

Determine basic data with the ICM-20948

This first sketch is the one I go into most intensively. Much is repeated in the following sketches.

Before I start, a comment about the data type “xyzFloat”. This is a structure (struct) consisting of three float values. I use xyzFloat for all data that has an x, y, and z component.

I have implemented several constructors. This allows you to pass the I2C address and/or the I2C object. The latter is interesting if, for example, you want to use both I2C interfaces of an ESP32.

The function init() first resets the ICM-20948 and writes default values to some registers. init() returns “false” if the ICM-20948 does not answer, otherwise true.

In the motionless state, only the acceleration due to gravity acts on the ICM-20948. If it is positioned flat (i.e. with its x,y plane), the g value should be zero for the x and y axes and one for the z axis. However, these values are more or less shifted. The function autoOffsets() measures the offset values which are subtracted from future measured values. However, it does not correct the slope.

autoOffsets() works only then reliably,

Alternatively, you can use the function setAccOffsets(). It leads to less good results regarding the zero point, but it is more accurate at larger angles. In addition, it corrects the slope, and you do not have to position the module flat at program start.

The function setAccRange() sets the range for the acceleration measurements.

To control the data rate of the accelerometer, use the function setAccSampleRateDivider(divider).

However, this only works if the digital low pass filter (DLPF) is activated. With setAccDLPF(level) you enable the DLPF and select the level. The parameter ICM20948_DLPF_OFF disables the DLPF. The higher the level, the lower the noise. Only level 7 does not fit in this series in this respect. The disadvantage of strong noise reduction is reduced response time. This means that when the acceleration changes, it takes a while for the MPU9250 to output the correct value.

With enableAcc(true/false) you can switch the accelerometer on or off.

You can query the measured values with the following functions:

If only gravity acts on the ICM-20948, the resultant should always be 1. With the resultant function, you can easily measure accelerations without having to align the movement to one axis. Simply subtract 1 to compensate for gravity.

Since you already know some functions, the explanation of the gyroscope sketch can be much shorter.

Again, you can use the autoOffsets() function. The gyroscope should indicate zero or at least fluctuate around zero for all axes in the motionless state. However, you will notice some offset that is independent of the orientation. Alternatively, apply the values determined in the measuring range +/-250 °/s in setGyrOffsets(). I’ll come back to that in the section of the calibration sketch.

You activate the low-pass filter (DLPF) with setGyrDLPF(value) and set the level. Here, too, a stronger filter leads to reduced reaction speed. Level 7 is an exception in this respect. ICM20948_DLPF_OFF disables the DLPF.

The magnetometer (AK09916) behaves like a separate component. It has its own I2C address, own registers and must therefore be initialized separately. If you apply an I2C scanner to the ICM-20948, you won’t detect the magnetometer. The magnetometer is not directly accessible, it is behind the ICM-20948, so to speak.  You control it via the auxiliary I2C interface described above, which is provided by the ICM-20948. However, you won’t notice any of this, as the library manages everything in the background.

The magnetometer has a power-down mode, a trigger mode and four continuous modes. The continuous modes differ in data rate, namely 10, 20, 40 or 100 Hz. The mode is set with setMagOpMode().

You retrieve the measured values with getMagValues(). The result is output in microtesla. The function returns the values that are currently in the data buffer. Before that, you have to call readSensor() to update the data buffer with the latest sensor data.

In trigger mode, a measurement is initiated with setMagOpMode(AK09916_TRIGGER_MODE). If you choose this option, you must give the magnetometer enough time to perform the measurement and transmit the data to the ICM-20948 data registers.

For the following output, I rotated the ICM-20948 flat in its x,y plane:

In Central Europe, the magnetic flux density of the Earth’s magnetic field is about 20 microns in the horizontal and around 44 µT in the vertical (source: German Wikipedia). Accordingly, the difference between the maximum and minimum value for rotation in the horizontal or vertical should be 40 and 88 μT respectively. You probably won’t measure that values because:

This sketch is designed to help you determine the offsets for the accelerometer and gyroscope. For this purpose, the lowest measuring range and the maximum low-pass filter are set first. This ensures high resolution and low noise.

For the offset determination of the accelerometer, turn the ICM-20948 slowly (!) around its axes and note the maximum and minimum raw values. It is best to have your elbows on the table when doing this, as any shaking will result in additional acceleration. You then use this data for the setAccOffsets() function. Internally, the offsets are determined from this. When you change the measuring range, the offsets are automatically adjusted. With this method you are no longer dependent on the level orientation of the ICM-20948 at program start. For the determination of precise small angles, however, I still recommend the autoOffsets() function.

For the gyroscope offsets you do not need to rotate the ICM-20948 because the offset is independent of the inclination. You apply the values for the x-, y- and z-axis as parameters in setGyrOffsets().

Using this sketch, you can determine the acceleration, gyroscope values, magnetometer values and temperature. You query the temperature with getTemperature(). I have already explained all other functions. You can find the sketch in the examples.

The thermometer is not so much used to measure the ambient temperature as to track the temperature in the ICM-20948. It is higher than the room temperature and increases in operation depending on the measurement conditions.

How to measure angles with the ICM-20948

You can use the (earth) acceleration data to calculate tilt angles. You have to make sure that no additional acceleration acts on the ICM-20948. I have implemented two methods for this.

With the method presented in this sketch, the angle α between the axes and the horizontal is calculated quite simply from the arcussine of the acceleration value.

For small angles this works perfectly, at larger angles the error increases. Why this is the case, I explained in my article about the MMA7361. Up to 60°, the deviation in my experiments was less than one degree.

For this sketch, I recommend to use autoOffset(). With this function, you start at an angle of 0° for the x- and y-axis. For the z-axis you get a starting value around 90°. Since this is a large angle, the z-axis angle fluctuates strongly. For the tilt angles, you will only get reasonable values if you position the ICM-20948 flat for calibration.

The following functions are added here:

For the following output I have rotated the module around the y-axis, i.e. I have erected the x-axis.

This method uses multiple axes to calculate the angles. As a result, the values are more accurate at large angles than with the simple arc sine method. On the other hand, at small angles, the latter method is preferable. To delineate the method, I used the nomenclature of other libraries and referred to the x-axis tilt angle as “pitch” and the y-axis tilt angle as “roll angle”. You find a definition hier

For comparison, I use both methods in this sketch. Try it out and choose what suits you more.

The second part of the article is about interrupts, the low-power mode and the FIFO buffer.