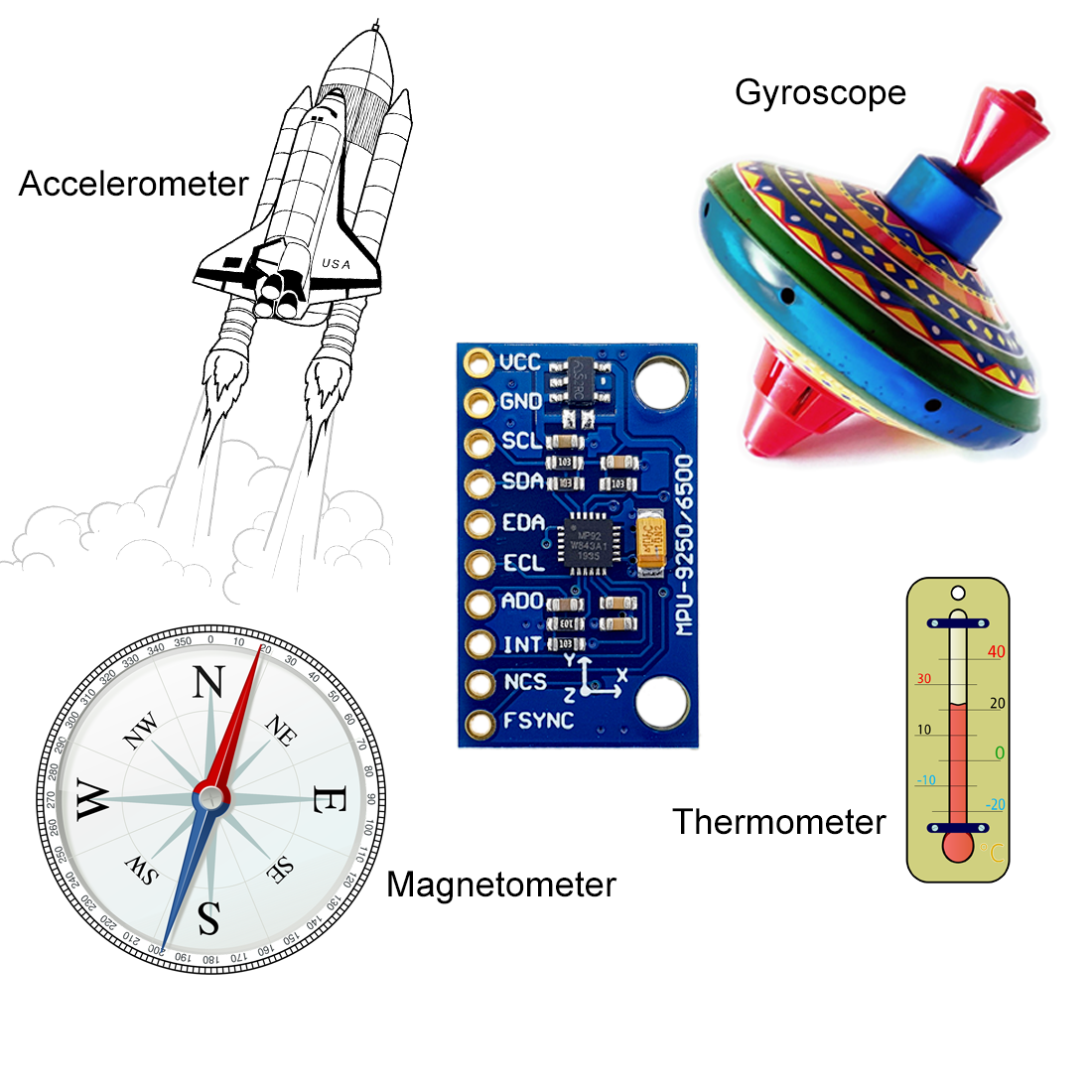 In previous articles, I have introduced the accelerometers MMA7361 and ADXL345. I also reported on the MPU6050 gyroscope and accelerometer sensor module. This time I would like to focus on the 9-axis sensor module MPU9250. It combines four functions:

During my research, I was looking for a library that on the one hand implemented the many functions and setting parameters of the MPU9250, but on the other hand can be operated without having to go into the depths of the data sheet. Since I didn’t really find what I was looking for, I wrote a library myself, which I will present in this article.

Update 25th of March 2022: The library now also works with the MPU6500, which is basically an MPU9250 without a magnetometer. Moreover I have implemented SPI control. Example sketches are attached to the library.

Update 30th of July: I am getting more and more comments and e-mails that the magnetometer does not work and/or that the sketches report back “MPU9250/MPU6500 does not respond”. Please read readme on GitHub and check your module with the example sketch MPU9250_who_am_I.

Because of the size of the topic, I have decided to split the post. In this first part, I deal with:

In part 2, I will continue the introduction to my library:

Features and specifications of the MPU9250

How a gyroscope and an accelerometer works, I have already described in my article about the MPU6050. The magnetometer works based on the Hall effect. You find a good animation here.

The MPU9250 is actually a discontinued model. On the manufacturer’s pages it is marked as “EoL” (End of Life). But I assume that you can buy the modules for a few more years. On Amazon and eBay, the selection of stores that offer the MPU9250 is huge. The successor model is the ICM-20948, which I will report on soon. However, the modules are still relatively expensive (€15). You can get the MPU9250 for half the price.

Since the MPU9250 combines four sensors, a complete list of technical data would be beyond the scope. The essential key data is:

The MPU9250 allows you to control five additional sensors via I2C in a subnet, to store and read the data in the MPU9250, or store it in the FIFO. But I have only implemented that for the magnetometer.

Further information can be found in the technical data sheet, in the register map and in the data sheet of the magnetic sensor AK8963.

Control of the MPU9250 with Arduino UNO & Co

Pull-up resistors for the I2C lines are not needed. You may need to use a level converter or voltage divider for the inputs and outputs if you are using a 5V board. Even though the MPU9250 module has a voltage regulator for VCC, this does not necessarily mean that the other inputs are also regulated down.

The connection of the interrupt pin is needed for some example ketches. Since I set it active-high, I don’t need a voltage regulator for it.

Libraries for the MPU9250

There are a number of libraries available for the MPU9250. Check out the Arduino Library Manager or GitHub for this. As I mentioned at the beginning, I wasn’t happy with the available libraries, but that’s a matter of taste.

You can download my library MPU9250_WE here from GitHub or you install it directly via the Arduino IDE Library Manager.

The problem with the MPU9250 is that it has an incredible amount of setting options due to its 4 sensors plus I2C subnet control. In such cases,  the question arises whether everything that is possible should be implemented. And although I didn’t, my library contains fifty-nine public features. To explain the use of these functions, I have attached eleven example sketches.

Introduction to the library MPU9250_WE

To get to know the library and the MPU9250, I recommend trying out the sketches in the order used here. We start with the basic data for acceleration, gyroscope, magnetometer and thermometer. This is a pretty dry read! If I were you, I would get an MPU9250 and try out the example sketches in parallel in practice.

This first sketch is the one I go into most intensively. Many functions are also used in other sketches.

First, a comment about the data format “xyzFloat”. This is a structure (struct) consisting of three float values. I use xyzFloat for all data that has an x, y, and z component.

The function init() first performs a reset of the MPU9250 and writes default values to some registers. init() returns false if the MPU9250 should not be responsive, otherwise it returns true.

If the MPU9250 is positioned flat, i.e. horizontal x,y-plane, only the acceleration due to gravity acts on it. Accordingly, the g-values for the x- and y-axis should be zero and for the z-axis it should be one. However, these values are more or less shifted. The function autoOffset() measures the offset values which are subtracted from future measured values. The slope, on the other hand, had not to be corrected for the modules I tried out. In the 2g range, the difference between the minimum and maximum raw acceleration values was quite close to the expected 2 x 16348 (i.e. 2x 1015). autoOffset() only works reliably if:

Alternatively, you can use the setAccOffsets() function. It results in less good zero values, but is more accurate with larger angles, and you don’t have to position the module when the program starts.

The function setAccRange() sets the range for the acceleration measurements.

To control the data rate, you use the function setSampleRateDivider(divider).

However, this only works if the digital low pass filter (DLPF) is activated and its mode is 1 to 6. The DLPF is (de-)activated done with enableAccDLPF(true/false). You choose the level with setAccDLPF(). The higher the level, the lower the noise. Only level 7 does not fit in this series in this respect. The disadvantage of high smoothing is reduced response time. This means that when the acceleration changes, it takes a while for the MPU9250 to output the correct value. Details of these delay times can be found in the sketch.

With sleep(), you put the accelerometer and the gyroscope to sleep. However, this does not apply to the magnetometer, as it has a certain life of its own (not sure if this translates well).

If you don’t want to activate all axes, you can use enableAccAxes() to change the default setting. The parameters are explained in the sketch.

You can query the measurement results with the following functions:

If only gravity affects the MPU9250, the resultant should always be 1. With the resultant function, you can easily measure accelerations without having to align the movement to an axis. Simply subtract 1 to exclude the earth’s acceleration.

And this is the output on the serial monitor:

Since you already know some functions, the explanation of the gyroscope functions can be much shorter.

The setting options for the gyroscope

Again, you can use the autoOffsets() function. The gyroscope should return zero for all axes in the non-moving state, or at least fluctuate around zero. However, you will notice some offset that is independent of the positioning (tilt). Alternatively, use the values determined in the +/-250 °/s measuring range for setGyrOffsets(). I’ll come back to that when we talk about the calibration sketch.

You activate the low-pass filter (DLPF) with enableGyrDLPF(). If you disable the DLPF, you can still choose between the two bandwidths 8800 and 3600 Hz. Therefore, you have to pass the corresponding parameters to the disableGyrDLPF() function. You choose the level of the low-pass filter with setGyrDLPF(). Here, too, a stronger filter leads to greater delays. Similarly, level 7 does not fit in the series. Level 6 provides the lowest noise.

The first values in the output below were determined without moving the MPU9250. For the second set of values, I rotated the module around its x-axis.

The magnetometer (AK8963) behaves like a separate device. It has its own I2C address (0x0C) and own registers. Thus, it has to be initialized separately. If you check the MPU9250 with an I2C scanner, it will only detect the MPU9250 address. The magnetometer is not directly accessible behind the MPU9250. It is controlled via a kind of I2C subnet which is provided by the MPU9250. However, you won’t notice that complexity since the library manages all that in the background.

The settings for the magnetometer

The magnetometer has a power-down mode and two continuous modes. The continuous modes differ in the data rate, namely 8 or 100 Hz. You’re setting the mode with setMagOpMode().

You can query magnetometer values with getMagValues(). The result is output in microtesla. The function returns the values that are currently in the data store. In 8 Hz mode the data can be up to 125 ms “old”. Accordingly, after initialization the first value could be zero. To avoid that I have added a delay().

The results were a little sobering at first. I expected to be able to use the MPU9250 as a compass without any problems.

In Central Europe, the magnetic flux density of the Earth’s magnetic field is about 20 microns in the horizontal and around 44 µT in the vertical (source: German Wikipedia). Accordingly, the difference between the maximum and minimum values when rotating the module horizontally and vertically should be 40 and 88 micrometers, respectively. You, like me, probably won’t measure that because:

I had also played around with strong magnets and magnetized my breadboard. Only when connecting with jumper cables only from below and without breadboard the results made more sense.

I haven’t (yet) pursued using the magnetometer as a compass. According to what I have read in other articles for other magnetometers, this seems to be a science in itself. At least if you don’t just want to find north and south.

This sketch provides acceleration, gyroscope data, magnetometer data and the temperature. You query the temperature with getTemperature(). The other functions have been introduced before. You find the sketch in the examples.

This sketch is designed to help you determine the offsets for the accelerometer and gyroscope. For this purpose, the lowest measuring range and the maximum low-pass filter are set first. This ensures high resolution and low noise.

For the offset determination of the accelerometer, you turn the MPU9250 slowly (!) around its axes and note the maximum and minimum raw values. It is best to have your elbows on the table when doing this, as any shaking will result in additional acceleration. You then use this data for the setAccOffsets() function. Internally, the offsets are determined from this. When you change the measuring range, the offsets are automatically adjusted. With this method, you no longer need to position the MPU9250 flat when starting the program. However, I would still recommend the function autoOffsets() to determine precise small tilt angles precisely.

For the gyroscope offsets you don’t have to rotate the MPU9250 because the offset is independent of the inclination. You take the values for the x-, y- and z-axis as parameters in setGyrOffsets().

You can find the sketch in the examples. I don’t show it here.

The second part of the article is about angles, interrupts, the low-power mode and the FIFO buffer. Of course, you don’t have to wait since you can try the example sketches now.

I found the MPU9250 as a Fritzing component here – thanks to Randy!

I found the parts for the post picture as usual on Pixabay. The compass, the space shuttle and the thermometer are taken from OpenClipart-Vectors. The gyro is from InspiredImages (Anthony).